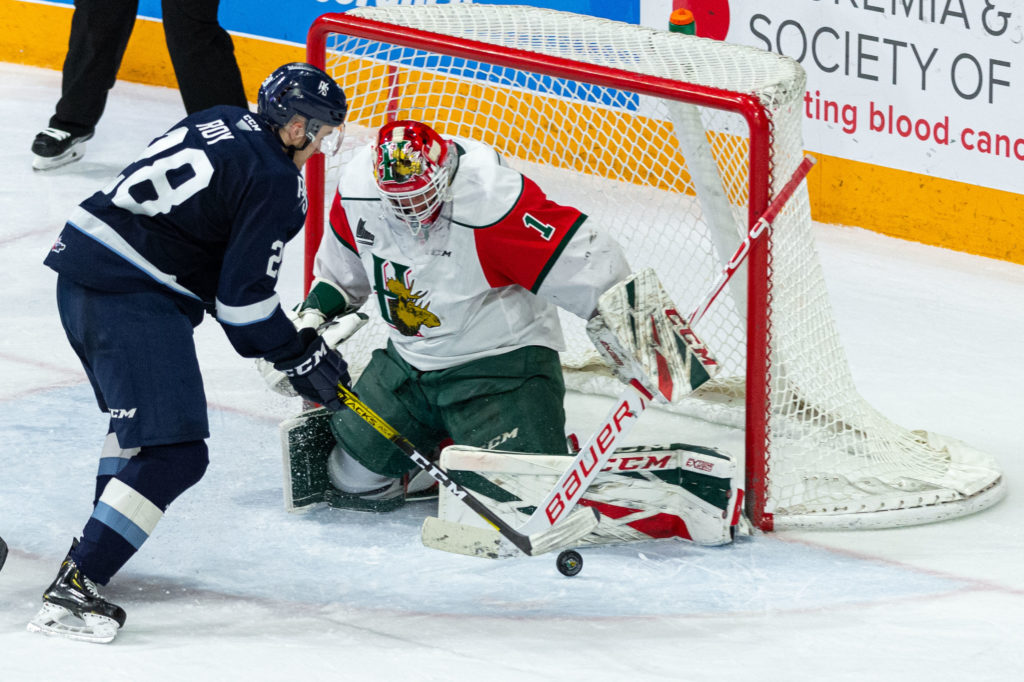 The Mooseheads were faced with the unenviable task of taking on the top ranked team in the QMJHL while mired in the midst of a season-worst losing skid. However, despite falling 3-1 to the Sherbrooke Phoenix on Sunday and extending the losing streak to six, the Herd could hold their heads high after giving a valiant effort in a game that was likely expected to finish with a more lopsided score.

Alex Gravel continued his strong play in the second half of the season by backstopping the Mooseheads with 27 saves to earn the third star of the game.

Sherbrooke got 28 saves from goalie Thomas Sigouin while Benjamin Tardif and Olivier Crete-Belzile each had a goal and an assist to lead the Pheonix to their QMJHL best 40th win of the season. The Phoenix are currently ranked second in the CHL Top 10 rankings.

20-year-old Felix Robert opened the scoring for the visitors in front of 7,747 on Girl Guides Day in Moose Country when he roofed a nice shot on the power play 7:44 into the game. Sherbrooke never trailed in the game and built a 2-0 advantage on Tardif’s shorthanded marker in the second period. Halifax cut the deficit in half 1:10 after the Tardif goal when Ozzie King ripped in a shot right off the face off for his first goal in a Mooseheads uniform. It didn’t take long for the Phoenix to restore the two-goal though as Crete-Belzile replied 55 seconds later to make it a 3-1 game. The goalies shut everything else down for the remainder of the game and the Moose fell for the sixth consecutive game to drop their record to 18-28-3-1.

The next game for the Mooseheads is set for Friday, February 14th on the road against Acadie-Bathurst. Halifax will return to Scotiabank Centre ice next Sunday at 3pm against the Saint John Sea Dogs. Tickets are available at the Ticket Atlantic Box Office, select Superstore outlets, TicketAtlantic.com or charge by phone 902-451-1221.