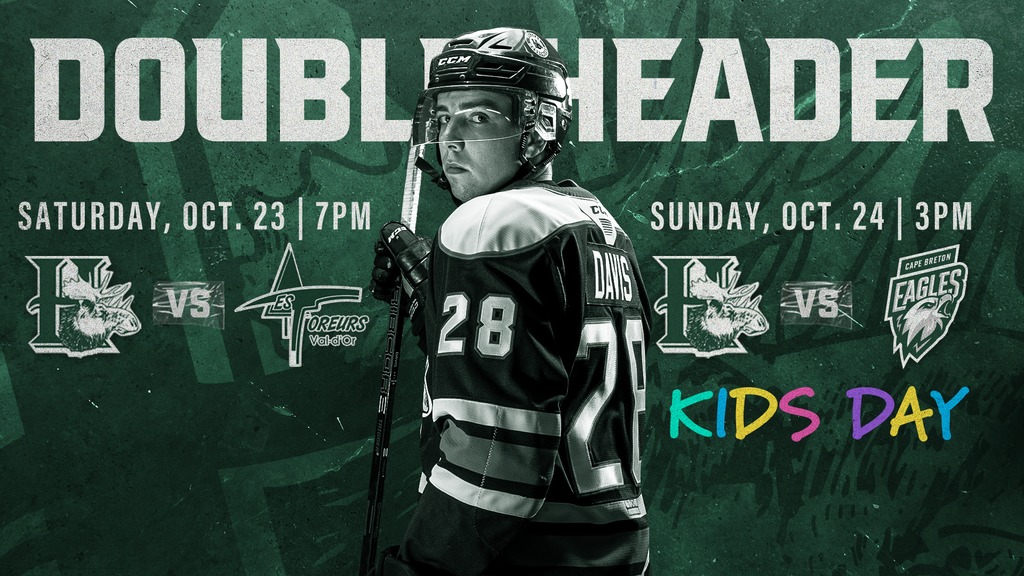 Your Mooseheads have been on fire to start the season and will bring a three-game winning streak into action on home ice this weekend at Scotiabank Centre. Halifax plays host to the Val d’Or Foreurs on Saturday night at 7pm and the Cape Breton Eagles on Sunday afternoon at 3pm. The first ever Kids Day will be celebrated during Sunday’s game with $5 tickets for kids 12 & under. Tickets are on sale now at TicketAtlantic.com.

The record for the Mooseheads sits at 4-1-0-1 and includes three consecutive impressive wins over Charlottetown, Shawinigan and most recently, a 4-0 shutout of the Moncton Wildcats. The team is led in scoring by 17-year-old right winger Jordan Dumais who has nine points and has found some electric chemistry on the top line with Elliot Desnoyers and Zachary L’Heureux.

Forward James Swan, the reigning winner of the Mooseheads’ Hardest Working Player Award, is expected to make his return to the lineup on Saturday after missing the first six games of the season due to a hand injury suffered during training camp. Swan, Dumais, Jake Furlong and Markus Vidicek were all given “C” ratings by NHL Central Scouting earlier this week as potential fourth-sixth round picks in the 2022 NHL Entry Draft.

Val d’Or enters the week as the seventh ranked team in the Canadian Hockey League after a 4-0-1-0 start to the season before coming back to earth with an 8-2 loss to the Quebec Remparts on Sunday. The Foreurs are led in scoring by forward Alexandre Doucet who has contributed 10 points. Their star player is forward Justin Robidas, a Carolina Hurricanes draft pick, who has five goals and six points this season. Halifax serves as the middle stop on a three-game weekend tour that begins Friday in Cape Breton and ends Sunday in Charlottetown.

Sunday’s game versus Cape Breton will be the third meeting of the season between the provincial rivals after the clubs opened the season with a home-and-home series. The Mooseheads grabbed the opening night win in Sydney by a score of 3-2 but the Eagles got revenge at Scotiabank Centre the next night in another close game by grabbing a 4-3 shootout win. Cape Breton has played eight games and has needed overtime or a shootout to decide the outcome in six of those contests. The game on Sunday is being billed as Kids Day with kids-themed in-game promotions throughout the day.