2 points just out of reach in Saint John 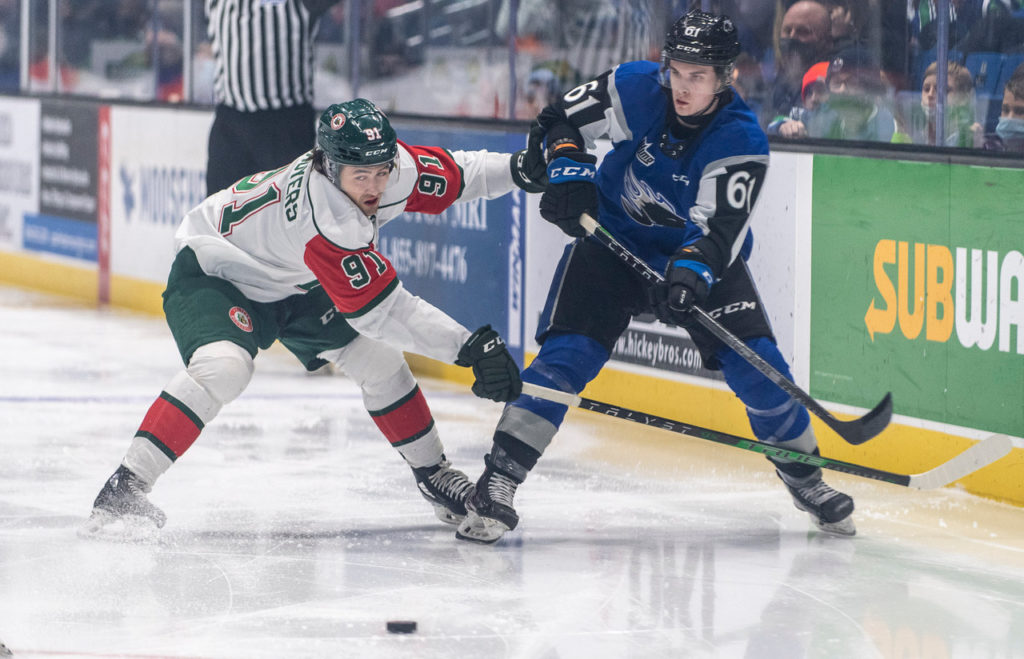 The Mooseheads fought hard to force overtime in Saint John on Tuesday night, where they came away with one point after eventually falling 4-3 to the Sea Dogs.

Attilio Biasca capitalized late in the third period on an excellent play behind the net from Zach L’Heureux to set up the Swiss import forward who buried his chance to tie the game 3-3. The Mooseheads goal was the result of an extended momentum swing in Halifax’s favour as the road team showed they would not go down without a fight. The Herd more than doubled the Sea Dogs in shots in the final 20 minutes of regulation with a 13-6 edge and finished the night with a 36-29 advantage on the shot clock.

Unfortunately for the Mooseheads, the team never even got a chance to mount an offensive attack in the overtime frame with Saint John ending it early when William Villeneuve struck just 18 seconds in. The Sea Dogs (12-8-0-3) pulled ahead of Halifax (12-8-1-1) by one point in the standings for second place in the Maritimes Division.

The ice was still drying when Saint John got the scoring started in the first period with first star Josh Lawrence lighting the lamp at the 2:28 mark. Lawrence had a big night for the Dogs with one goal and two assists. Halifax answered back late in the period with Jordan Dumais pulling his team even when he out-muscled Nico Laforge in front of goalie Noah Patenaude to net his 10th of the year. Captain Elliot Desnoyers was originally credited with an assist but had it taken away later by the QMJHL statisticians.

20-year-old Zac Beauregard gave the Mooseheads their only lead of the night just 44 seconds into the second period as he carried the puck the length of the ice before ripping a shot by Patenaude for a 2-1 Halifax advantage. The Dogs returned the favour with a momentum swing of their own and a goal from Peter Reynolds at 11:08. The teams went to the dressing room tied at 2 after 40 minutes.

Saint John went in front 3-2 with a goal in the opening minute of the third period by defenceman Jeremie Poirier. Halifax carried the play for the majority of the final regulation stanza with Biasca striking in the dying minutes to help secure the point.

Brady James made the start in goal for the Moose and made 25 saves in defeat while Patenaude stopped 33 for the win. The teams played a disciplined game with just six penalty minutes aside and both clubs going scoreless in two power play opportunities.

The road trip continues on for the Mooseheads this weekend with the team set to bus to Quebec from Saint John for three-games-in-three-days. Halifax will visit the Victoriaville Tigres on Friday night, Shawinigan on Saturday and the trip concludes Sunday in Quebec City. The Mooseheads will get a boost to the lineup on the weekend with rookies Mathieu Cataford, Dylan MacKinnon and Logan Crosby set to meet up with their team in Victoriaville after participating in Hockey Canada’s U17 Capital City Challenge.