Back-to-Back Wins for the Moose 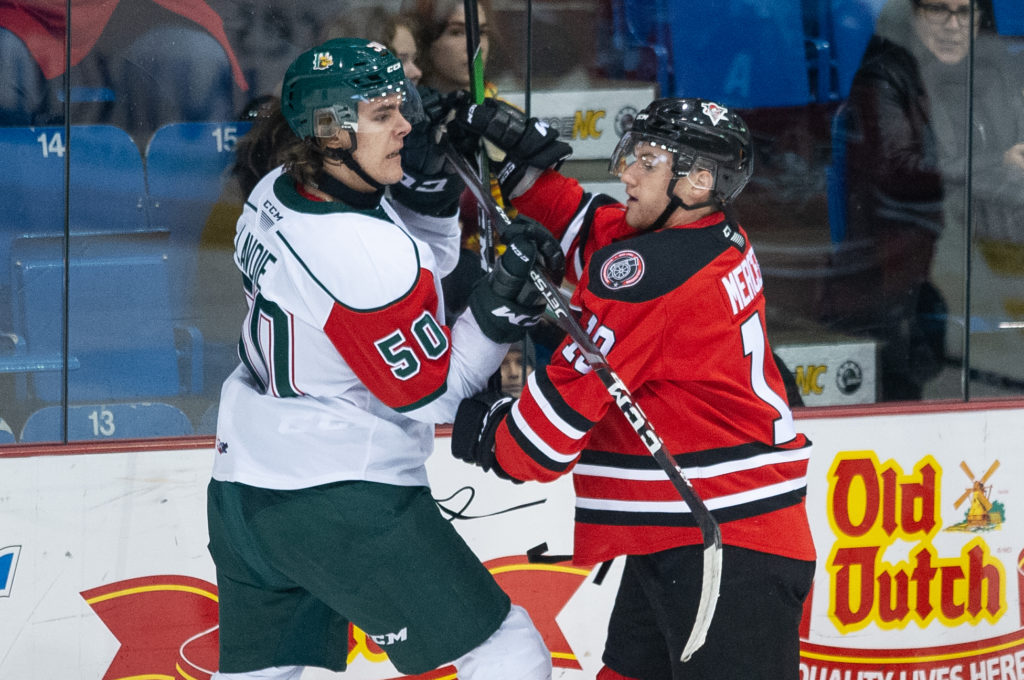 Benoit-Olivier Groulx made his return to the lineup and just like that, the Mooseheads enjoyed their most successful game of the young season with a convincing 5-1 victory over the Voltigeurs on Wednesday night to begin a road trip in Drummondville.

Halifax scored three times in the final period of regulation to bury the Volts while goalie Cole McLaren backstopped the Herd with 25 saves in the rematch of last season’s QMJHL Semi-Final series. A crowd of 2,007 watched first star Raphael Lavoie put on a show with three points while Groulx scored in his first game since coming back to the team from Anaheim Ducks training camp to improve the Mooseheads’ record to 2-3-0-0.

The Mooseheads never trailed in the game while rookie Zack Jones opening the scoring on a deflected Walter Flower point shot at 15:45 of the first period. It was the third goal in as many games for the 18-year-old American who has had a terrific start to his QMJHL career. It was a fairly physical affair with plenty of penalties dished out, 20 in total, and a combined 40 hits between the teams.

The lead was doubled early in the second period when Raphael Lavoie wreaked some havoc on the penalty kill. The Edmonton Oilers prospect used his big reach to strip Austrian import Thimo Nickl of the puck while on the forecheck before gliding in on goalie Anthony Marrone and scoring on a backhand shot just 1:40 into the middle stanza. The 2-0 lead held up through 40 minutes and Halifax blew it wide open in the third.

Lavoie picked up his second point of the evening when he and Max Trepanier chipped in on Groulx’s first goal of the season that came on a rebound at the side of the net at the 3:30 mark. The trio were teamed together on the top line for the first time this season and did not disappoint by combining for six points.

The Mooseheads upped the advantage to 4-0 on Trepanier’s first goal of the season about seven minutes later to join Lavoie and Walter Flower as players with multi-point efforts. Flower finished the night with two assists. Drummondville broke McLaren’s shutout bid with 7:21 to play when Jacob Dion got loose in the slot and beat the goalie who has been lights out this season. The 19-year-old from Annapolis Royal, NS is 2-1 with a 1.39 goals against average and an incredible .951 save percentage, ranking third in the league in both categories. Senna Peeters finished off the scoring with his third goal of his rookie campaign with Jason Horvath and Sam Dube providing a nice setup.

Forward Jordie McKenna played in his first game since being added to the roster on Monday. He made an immediate impact and picked up his first career point with an assist on the goal by Zack Jones.

Penalty killing continued to be a strong suit for the Herd who were a perfect seven-for-seven. The team leads the QMJHL with a 95.5 percent success rate and has only allowed one goal on 22 chances for the opposition. While the penalty kill was great, the power play continued to struggle. The Mooseheads were 0-4 and are now second last in the category with just two goals on 22 chances on the man advantage this season which works out to a 9.1 percentage.

The road trip continues Friday night at 8:30 Atlantic in Chicoutimi before wrapping up in Baie-Comeau at 5pm on Saturday. Listen to both games live on NEWS 95.7 with play by play host Garreth MacDonald. The next home game at the Scotiabank Centre is Thursday, October 10th versus Saint John at 7pm. Tickets are on sale now at the Ticket Atlantic Box Office, TicketAtlantic.com, select Superstore outlets, the Official Mooseheads Shop in Scotia Square Mall or by phone 902-451-1221