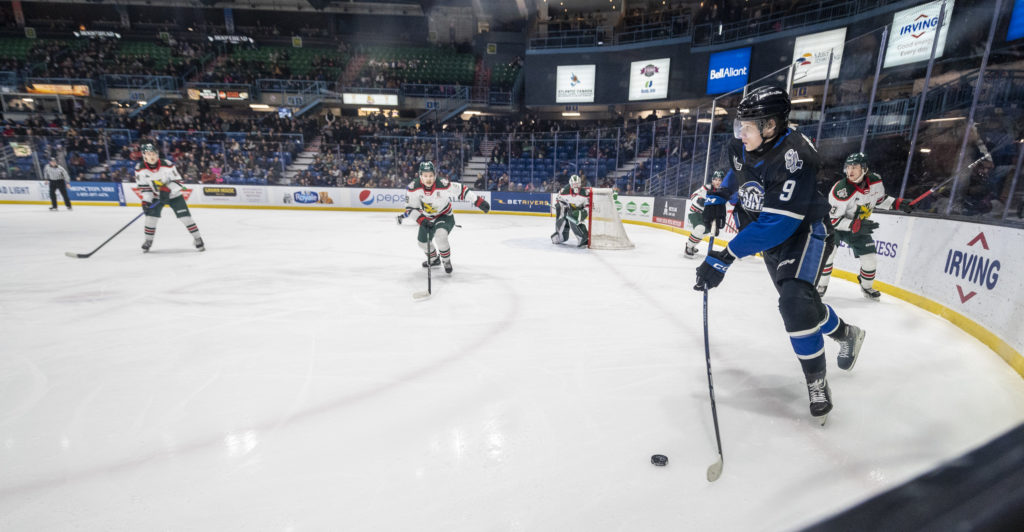 Forward Attilio Biasca accomplished something on Saturday that only two other Mooseheads players had ever done when he scored five goals in a stunning 10-7 victory over the Sea Dogs at TD Station.

The Halifax Captain tied Nathan MacKinnon and Jason King for most goals scored in one game when he shot the puck into an empty net to seal the wild win with 2:48 remaining in regulation. He also had an assist in the game for a six-point effort in the wild contest.

The Mooseheads carried a 6-3 lead into the final period of regulation with the game seemingly under control, only to watch the Sea Dogs fight back twice to give the Herd a real scare. Saint John reeled off three consecutive goal in a six-minute span early in the third period to tie the game 6-6 and chase Brady James from the Halifax crease. The Mooseheads regained the lead 7-6 just 30 seconds after the Sea Dogs had pulled even when Mathieu Cataford buried his 22nd of the season. Then, only 37 seconds after the Cataford tally, the Dogs tied it again 7-7 as Mathis Rousseau gave up a Cole Burbidge hat trick goal.

The latest Burbidge tally had the more then 3,000 fans jumping with joy in the stands as the final period turned into a whirlwind of sequences. With the crowd still buzzing, Biasca cashed in on the power play for his fourth goal of the night at the 12:43 mark. That goal proved to be the game-winner, while Zach L’Heureux added some insurance just over two minutes later before Biasca capped off the astonishing game with his empty net goal.

Jordan Dumais also tied a team record for most assists in a road game with five. He now sits all alone in fifth place in all-time franchise scoring with 220 points. He is 22 points away from tying Jonathan Drouin for fourth. Brandon Benedict holds the franchise high water mark with 303.

Other Mooseheads players to score in the 19th consecutive game without a regulation loss included Evan Boucher and Markus Vidicek, who lit the lamp twice. With the lines being shuffled around throughout the game, Vidicek ended up on a line with Dumais and Biasca and the trio combined for 15 points to help run the Halifax record to 31-7-4-1 on the season.

The Herd will return home for a pair of games next weekend at Scotiabank Centre. The Mooseheads will host Cape Breton on Saturday, January 28th at 7pm when the team will wear special themed jerseys and help raise funds and awareness for the Canadian Cancer Society on Mooseheads Fight Cancer Night. Halifax will also play host to Acadie-Bathurst on Sunday, January 29th at 2pm in a matinee matchup at Scotiabank Centre. Tickets are on sale now at TicketAtlantic.com