Chalk up another Mooseheads win 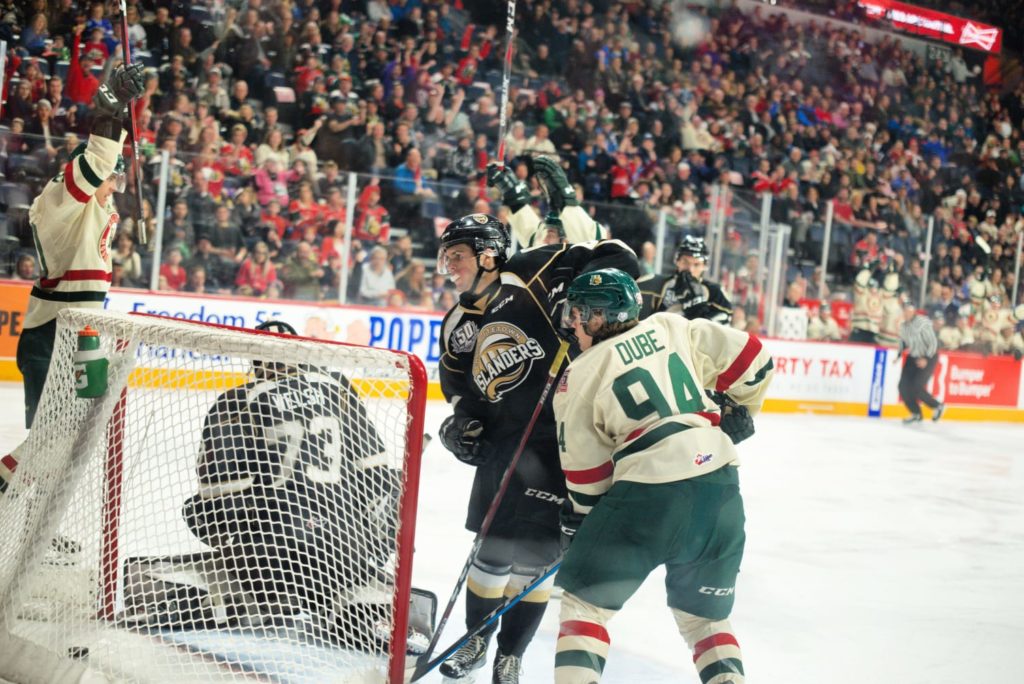 The Moose Country crowd made themselves heard across the country of Saturday in the latest win by the Mooseheads, a 3-0 shutout of the visiting Islanders on national television.

With Sportsnet in town, 9,607 fans were rocking before the puck even dropped and kept the enthusiasm going for the entire game to help push the home team to a fourth consecutive win. Raphael Lavoie was once again a huge factor in the victory with two goals while Jared McIsaac sealed it with an empty net tally. Alex Gravel was perfect between the pipes by stopping all 25 Islanders shots for third shutout of the season.

Halifax (41-12-2-1) was forced to play a much different game than the high scoring run-and-gun contests fans had been treated to lately. Charlottetown (30-18-4-3) likes to play a shutdown, physical style but the Moose were up to the task and beat the Isles for the seventh time in eight tries this season.

The two rivals played a scoreless opening period before Lavoie got the Herd on the board at 4:51 of the second stanza. The forward stood at the corner of the net and deflected a Justin Barron pass behind goalie Matt Welsh and the puck just barely trickled across the goal line. The goal was the 28th of the season for Lavoie and his eighth in the month of February. Patty Kyte was also credited with an assist on the play.

The game continued with great chances at either end of the ice and both Welsh and Gravel coming up with several key saves. The rambunctious crowd was happy with the one goal lead but anxious for another and they got to really explode when Lavoie scored again at 13:24 of the third period. The potential first round NHL Draft pick let one of his patented hard wrist shots go from the circle and blasted it by Welsh for a 2-0 advantage and the Scotiabank Centre erupted. Antoine Morand and Samuel Asselin had the assists.

Oh baby what a shot. Raphael is on 🔥#GoMooseGo pic.twitter.com/044r6PHdy5

The Isles pulled their goalie with about three minutes to go in regulation and McIsaac made them pay with a long range shot from his own end that rattled off both posts before it settled into the back of the net. Picking up the helpers on the goal were Joel Bishop and Keith Getson. The goal was the 14th of the season for the Red Wings prospect. No defenceman in Mooseheads history has scored more points on home ice than McIsaac who has 84 career points in front of the fans in Halifax.

Lavoie’s goals helped extend his consecutive games point scoring streak to nine games which is the same number of games that Morand’s current streak sits at as well. Asselin has set a new mark for best points streak in the QMJHL this season at 15 games. The trio have combined for 61 points in the last nine games. The Mooseheads team record for consecutive games with a point is held by Nikolaj Ehlers who found the scoresheet in 33 straight games in 2014-15.

Halifax played without forward Maxim Trepanier who was held out for precautionary reasons just one day after returning to the lineup for the first time since January 10th. He is listed as day-to-day. Marcel Barinka drew into the lineup and played on the fourth line with Brock Mcleod and Samuel Dube.

Sunday is an off day for the Mooseheads but they will travel to Saint John in advance of a holiday Monday afternoon matchup with the Sea Dogs. They meet at 2pm on Heritage Day at Harbour Station. The next home game for the Herd is coming up next Saturday, February 23rd when they host the Sea Dogs at 7pm. Tickets are on sale now at the Ticket Atlantic Box Office, select Superstore Outlets, TicketAtlantic.com, the Official Mooseheads Shop in Scotia Square or charge by phone 902-451-1221.