Comeback night against the Sea Dogs 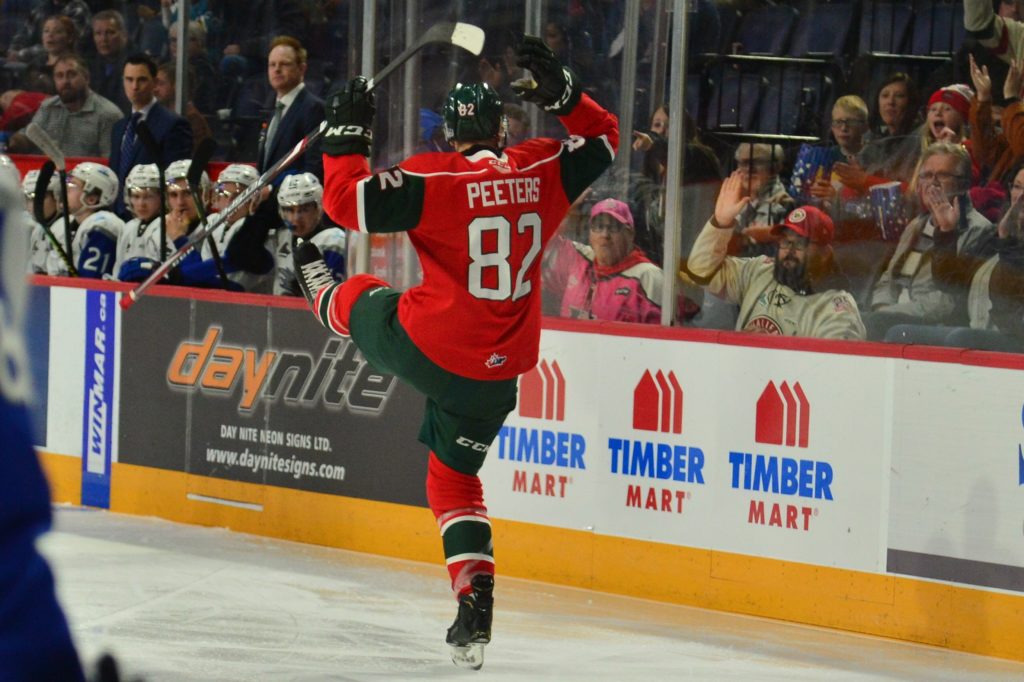 The Mooseheads evened their record to 4-4 on the season on Thursday night after erasing a 4-2 deficit with an exciting 6-5 victory over the Saint John Sea Dogs. Senna Peeters and Maxim Trepanier both scored twice in the win with Peeters supplying the game-winner in the third period. Defenceman Walter Flower also had a big game with a goal and two assists.

Peeters was sprung on a breakaway and scored with 7:21 left on the clock in regulation on a move to where he deked to the backhand and finished on his forehand by wrapping the puck around the sprawling left pad of Saint John goalie Zachary Bouthillier. The goal was the fourth in a row for the Herd and gave the home team a 6-4 advantage, leaving the Sea Dogs stunned.

It was a furious comeback for Halifax who actually opened the scoring in the game when Trepanier tallied 4:48 into the first period, but Saint John got back in it quickly on an off-night by goalie Cole McLaren. The Dogs tied the game just over a minute after the Trepanier marker when Joshua Roy got credit for a deflection in front of the net. Ben Badalamenti notched his first of two on the night on the power play while the Herd pulled even 2-2 before the period ended when Walter Flower went to the net and put home a backhand shot and the teams were tied after 20 minutes.

The Mooseheads were putting plenty of shots on Bouthillier but it was the Sea Dogs who found the results early in the second period with goals by Badalamenti and Charlie DesRoches for a 4-2 advantage. Halifax didn’t give up and kept coming at the Dogs in waves, eventually getting back within a goal late in the period when Justin Barron hammered in a point shot on the power play off a pass from defense partner Cam Whynot. The goal made it a 4-3 game with 1:58 remaining in the second period and set up a big final period by the Mooseheads.

Senna Peeters picked up his first of the night when he took the puck on the right side, swooped around behind the net and came out on the left side before sending a quick wrist shot from the dot that tied the game. Halifax kept the momentum going and took the lead when Trepanier tipped in a backhand attempt by Lavoie and Peeters capped off the outburst with his breakaway tally. The three goals came in a span of 6:31. The Sea Dogs got one back during 6-on-4 action. Jeremy Poirier got a power play goal with 1:27 remaining and Bouthillier on the bench.

Halifax went 1-3 on the man advantage while the Sea Dogs were 2-3. Final shots were 35-24 for the Mooseheads. Peeters was named the first star, Flower earned the second star and William Villeneuve notched four assists in the loss for the third star.

The Mooseheads will continue a busy Thanksgiving weekend Friday night at 7pm in Moncton. The Herd come back home on Sunday afternoon at 3pm to battle the Val d’Or Foreurs. Tickets are on sale now at the Ticket Atlantic Box Office, TicketAtlantic.com, select Superstore outlets, the Official Mooseheads Shop in Scotia Square Mall or by phone 902-451-1221.

The weekend wraps up with a holiday Monday matinee at 3pm in Charlottetown.