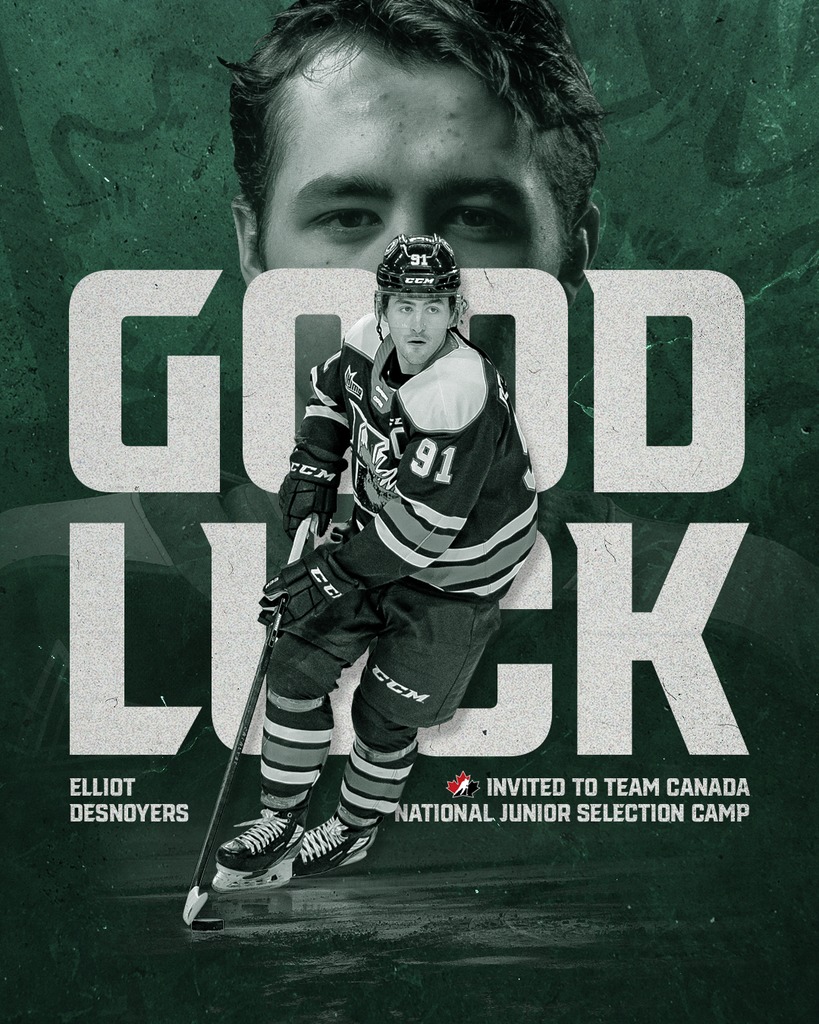 Halifax Mooseheads Captain Elliot Desnoyers was the recipient of some major news on Wednesday when he was named to Hockey Canada’s National Junior Team selection camp, set for December 9-12 in Calgary, AB.

The star centre and Philadelphia Flyers prospect has been nearly unstoppable for the Mooseheads this season with 34 points in 20 games played. He leads Halifax in goals with 14 and is second in assists with 20. Desnoyers is one of 35 players to get the invite to Canada’s camp and will be joined by seven other players from the QMJHL. Charlottetown defenceman Lukas Cormier is the lone Q blueliner while forwards Hendrix Lapierre of Acadie-Bathurst, Zach Dean of Gatineau, William Dufour of the Sea Dogs and Sherbrooke’s Joshua Roy will be there along with Shawinigan’s Mavrik Bourque and Xavier Bourgault.

Desnoyers attended Canada’s National Junior Team development camp this past summer along with teammate Zach L’Heureux, but L’Heureux was left out of the invitations this time around. Mooseheads forward Senna Peeters will play for Austria again and will leave for Edmonton on December 15th. Attilio Biasca is hopeful to be named to Switzerland’s squad for a second straight year as well. He is expected to be named to their selection camp roster in the coming days. Both Peeters and Biasca scored goals at the 2021 World Juniors for their respective countries.

The selection camp will be held at the WinSport Arena at Canada Olympic Park in Calgary. It will include practices and two games against a team of U SPORTS all-stars on Dec. 11 and 12 before the team heads to Banff, Alta., for a training camp, Dec. 14-19.

The 2022 IIHF World Junior Championship begins on Boxing Day with Canada kicking off its tournament schedule against the Czech Republic. In addition to its opening-night match-up, Canada will also play Austria on Dec. 28, Germany on Dec. 29 and Finland on Dec. 31 to wrap up preliminary-round action. All Team Canada games will be played at 7 p.m. ET.