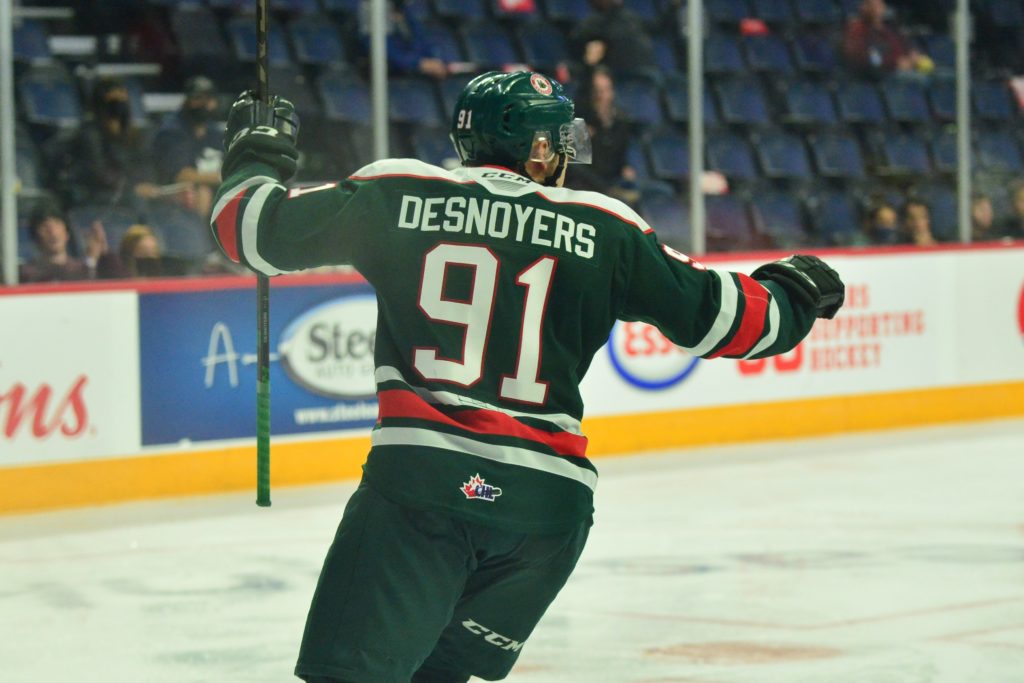 There is no one hotter in the QMJHL right now than Mooseheads forward Elliot Desnoyers, and his excellent weekend performance has earned him the QMJHL Player of the Week award for the second time in three weeks.

The 18-year-old from Saint-Hyacinthe, QC scored four goals including the game-winner in the final minute of regulation in Friday’s 5-4 victory over the division-leading Charlottetown Islanders before posting a three-point effort in Saturday’s 5-4 overtime win against the Saint John Sea Dogs. Desnoyers scored a highlight-reel goal and added two assists in the latest Halifax victory.

He is third in QMJHL scoring with 20 points in his first 11 games of the season and trails leaders Cedric Desruisseaux (Charlottetown) and Shawn Element (Cape Breton) by just one point for the scoring race lead. Desnoyers’ 11 goals matches his 61-game season total from last year with Moncton and is only one shy of his career high of 12 scored as a rookie in 2018-19.

He was originally selected 18th overall in the 2018 QMJHL Entry Draft by the Moncton Wildcats before being shipped to Halifax last offseason along with Zachary L’Heureux to complete the trades that sent Jared McIsaac and Benoit-Olivier Groulx to Moncton in January. Desnoyers has flourished in his new increased role in Halifax that has seen him play center on the top line in every game this season. The Philadelphia Flyers liked him enough to trade up during last month’s NHL Entry Draft to take him in the fifth round, 135th overall.

Desnoyers previously won the QMJHL Player of the Week award on October 26th after he notched is first career four-goal game against Cape Breton and added two assists in a loss to the Eagles during back-to-back games in Sydney.

The Mooseheads (5-5-2-0) will return to action this weekend on the road when they visit Acadie-Bathurst on Friday and Saint John on Saturday. Both games start at 7pm and can be heard live on NEWS 957 with Garreth MacDonald. Halifax’s next home games are set for Friday, November 20th and Saturday, November 21st against the Titan and Islanders. Tickets are on sale now at TicketAtlantic.com or charge by phone 902-451-1221.