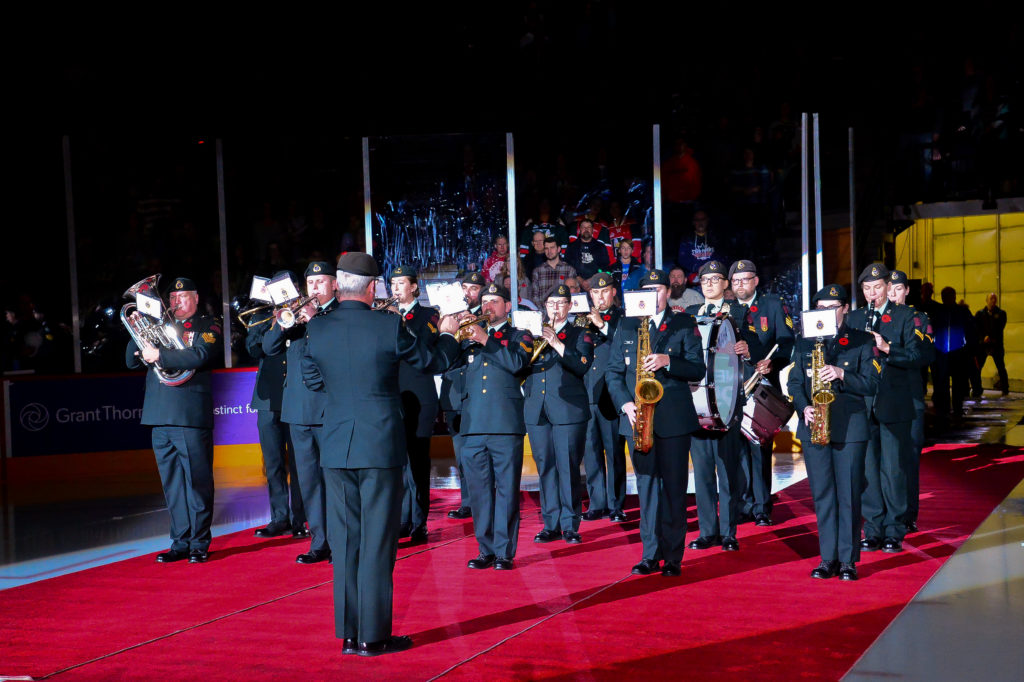 The struggles continued for the Halifax Mooseheads on Friday night in a 4-1 loss to Drummondville on DND Appreciation Night. The Herd have now dropped six of their last seven games to fall to 8-10-1-0 on the season.

Nicholas Girouard scored once and added an assist while Xavier Simoneau picked up a pair of assists to keep the Voltigeurs hot streak going. The Volts have exceeded expectations this season with a 14-7 record and they won their second in a row without Dawson Mercer who is serving a six-game suspension. Mercer is tied with Simoneau for the team scoring lead with 31 points.

The Mooseheads honoured the Canadian Forces with their 16th Annual DND Appreciation Game which raises funds for the Camp Hill Veteran’s Memorial Garden through the sales of raffle tickets on the commemorative game-worn jerseys. This season the Moose wore special jerseys that paid tribute to the HMCS Kootenay and the 50th anniversary of the tragic engine room explosion that claimed the lives of nine crew members and injured 53 others in 1969. It remains the worst peacetime accident in the history of the Royal Canadian Navy.

#3726 is the lone jersey raffle ticket that has gone unclaimed. The person with the winning ticket can bring it to Fans Corner at the next game or visit the Halifax Mooseheads Season Ticket Office in Scotia Square Mall to have your ticket verified and receive your jersey.

Halifax came out of the gates strong with a 14 shot first period but faded the rest of the way. Maxim Trepanier scored his 11th goal of the season on a deflection in front of the net off a point shot by Patty Kyte to account for all of the Mooseheads offense in the loss. The goal tied the game 1-1 after Girouard opened the scoring six minutes into the first period on a nice setup by Simoneau.

Drummondville pulled ahead for good in the second period with tallies by Isiah Campbell and Charles-Edouard Drouin while Austrian import rookie Fabian Hochegger made it 4-1 in the third period on the power play with Raphael Lavoie in the box. Hochegger taunted Lavoie by mimicking his bird wing goal celebration from Tuesday’s overtime win in the Canada-Russia Series.

The healthy Friday night crowd of 7,667 gave Lavoie, Benoit-Olivier Groulx, Justin Barron and Alex Gravel a nice ovation when they were recognized on the big screen for their accomplishments with Team QMJHL during the prestigious series.

Alex Gravel started and made 18 saves while taking his eighth loss of the season. Anthony Marrone stopped 20 of 21 at the other end of the ice and the teams split the season series 1-1. Halifax previously beat the Voltigeurs 5-1 at the Marcel Dionne Centre on October 2nd.

Next up for the Herd is a home game Saturday night against the Acadie-Bathurst Titan at 7pm. The Mooseheads have partnered with Q104 and the Parker Street Food & Furniture Bank to help our with a Christmas Toy Drive. Halifax Professional Firefighters, Q104 staff and Parker street staff will be at the rink as you enter the doors, collecting cash and new unwrapped toys for kids who could really use a little Christmas cheer.