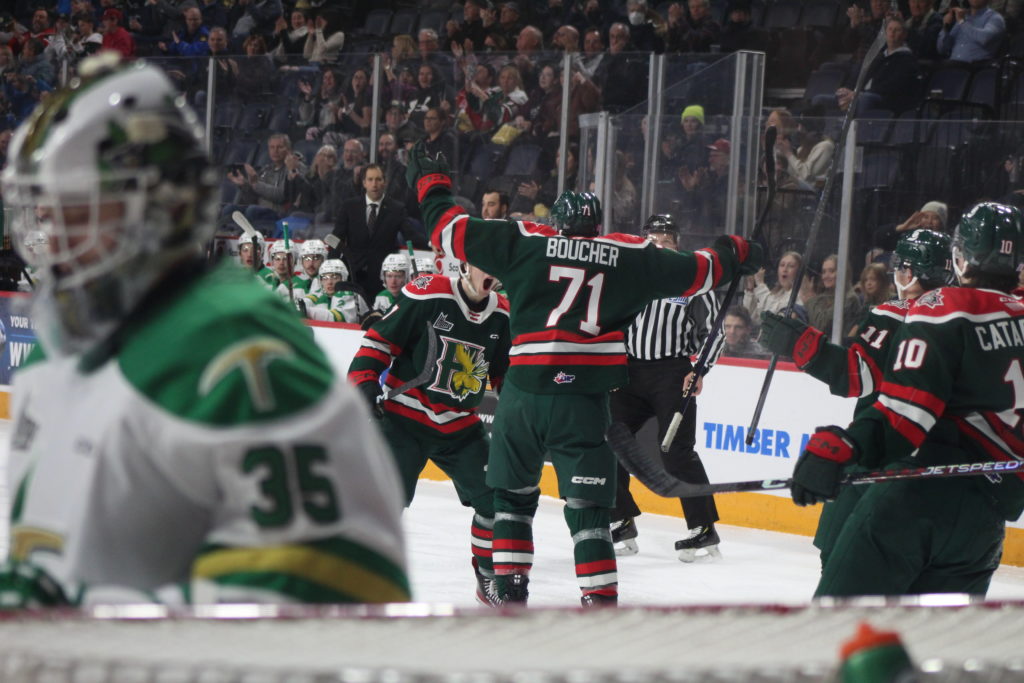 The visiting Val d’Or Foreurs used a pair of early goals and a pair of late game goals to upend the Mooseheads 4-3 in a tight battle on Thursday night at the Scotiabank Centre.

Alexandre Doucet scored twice in the opening 3:12 of the first period to stake the visitors to an early 2-0 advantage. Many fans hadn’t even reached their seats yet as the 20-year-old forward showed off some pretty moves to tuck the puck in behind goalie Brady James just 27 seconds into action and followed it up with his second goal just minutes later.

Halifax cut into the deficit when the red-hot Evan Boucher lit the lamp for the sixth time in four games at the midway mark of the first period. The big forward positioned himself at the bottom of the circle and converted on a pass out in front by Mathieu Cataford for his eighth point in the last four games.

The Mooseheads (13-6-2-1) carried the momentum over to the second period where they dominated in shots 14-6 but could not solve goalie Mathys Fernandez in the middle frame who wound up making 24 saves for the win. The Herd did manage to crack Fernandez again in the third period when Brody Fournier tied the game 2-2 with a snipe from the right circle at the 5:53 mark to bring some life into the crowd at Scotiabank Centre. Halifax kept pressing and hit a couple of posts with Boucher and Cataford hitting iron moments apart but it was the Foreurs who were able to cash in on their opportunities as Louis Robin put Val d’Or back in front 3-2 with 7:46 remaining in regulation before Thomas Larouche netted the game-winner with 90 seconds to play. Attilio Biasca tacked one on for Halifax in the final minute and six attackers on the ice but that was as close as they would get.

The Ontario boys are coming through tonight

QMJHL leading scorer Jordan Dumais picked up one assist in the game to increase his points total to 49 through 22 games.

That does it for the homestand for the Mooseheads, who will open up a road trip on Friday night in Cape Breton at 7pm before heading to Moncton on Sunday afternoon and then a trio of stops in the province of Quebec next week. The next home game for the Herd is set for Thursday, December 8th vs Blainville-Boisbriand and they will also host the Gatineau Olympiques for the Teddy Bear Toss game in support of Ronald McDonald House Charities on Saturday, December 10th at 7pm. Tickets are on sale now at TicketAtlantic.com.