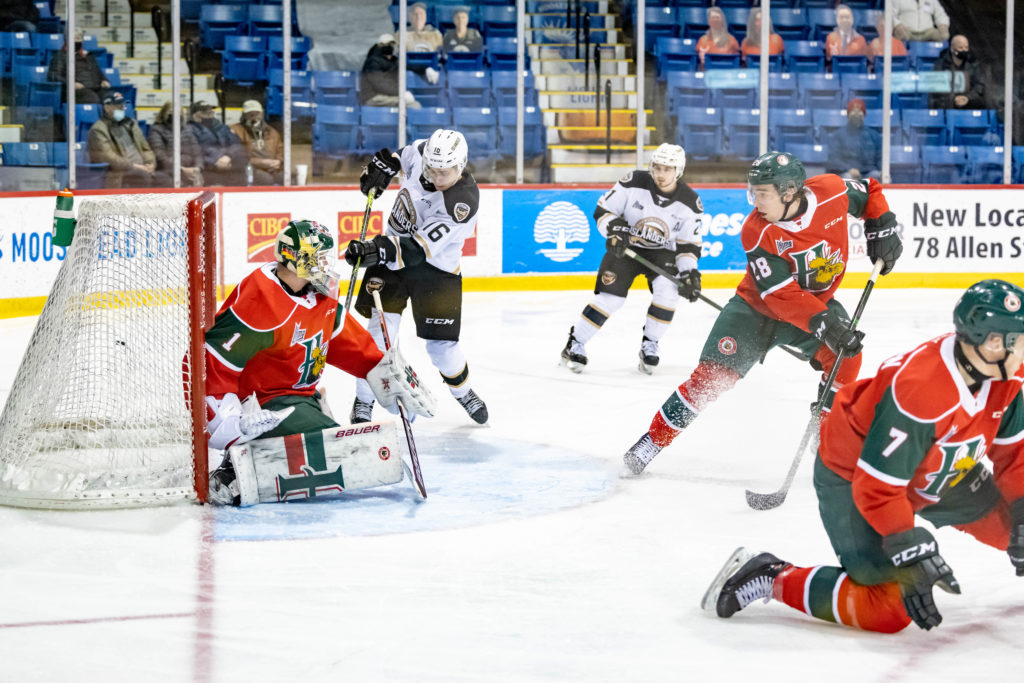 It took a 42 save performance from goalie Alexis Gravel, but the Mooseheads have snapped Charlottetown’s franchise record 15-game winning streak. Gravel was excellent between the pipes while Elliot Desnoyers picked up three points in a 5-2 Halifax victory on Wednesday night at the Eastlink Centre.

The Mooseheads accomplished the feat despite missing star Zachary L’Heureux who served the first of a two-game suspension, while seven other regulars were sidelined with various injuries.

Captain Justin Barron sparked a quick start when he put the visiting Herd up 1-0 with a floater from the point 4:37 into the game that beat a screened Jacob Goobie. Halifax built up a 3-0 lead by the end of the period on additional tallied by Bobby Orr and Desnoyers despite the Islanders leading 17-8 in shots.

The Moose survived a full two-minute two-man advantage by Charlottetown in the late stages of the opening period which proved to be a significant turning point in the game. Head Coach J.J. Daigneault was not pleased with the calls by the officials following a post-whistle melee that saw Halifax earn the extra penalty at the 16:23 mark of play, and the Moose picked up a bench minor when Daigneault voiced his displeasure to the referees to put Halifax two-men down.

Penalty trouble in the second period proved slightly costly when the Islanders grabbed a pair of power play goals when the Mooseheads were given three consecutive penalties in a span of 4:19. Oscar Plandowski and Cedric Desruisseaux picked up the Charlottetown goals.

Halifax took a 3-2 lead to the third period and got a little breathing room when Senna Peeters scored on a second effort attempt that trickled through a sprawling Goobie at the 3:27 mark. The Islanders continued to press but Gravel continued to deny them and the Herd got some extra insurance from rookie Jordan Dumais in the late stages of the game when he knocked home a loose puck following some mayhem around the Isles’ crease.

A little breathing room in the 3rd period.

Gravel was named the first star as he also set a new Mooseheads record for career minutes played by a goalie with 10,810:05 – surpassing the previous mark held by Zachary Fucale.

Desnoyers’ one goal and two assist helped him pick up the second star honours as he increased his season point totals to 21 goals, 28 assists and 49 points – all career highs for the Philadelphia Flyers prospect.

Three other players had multi-point efforts as Bobby Orr finished with one goal and one assist while Attilio Biasca and Landon Miron had two assists each for the Mooseheads, who upped their record to 15-16-5-4.

The game marked the second of five straight meetings between the Maritimes Division foes with the next matchup scheduled for Friday night at 7pm at Scotiabank Centre.