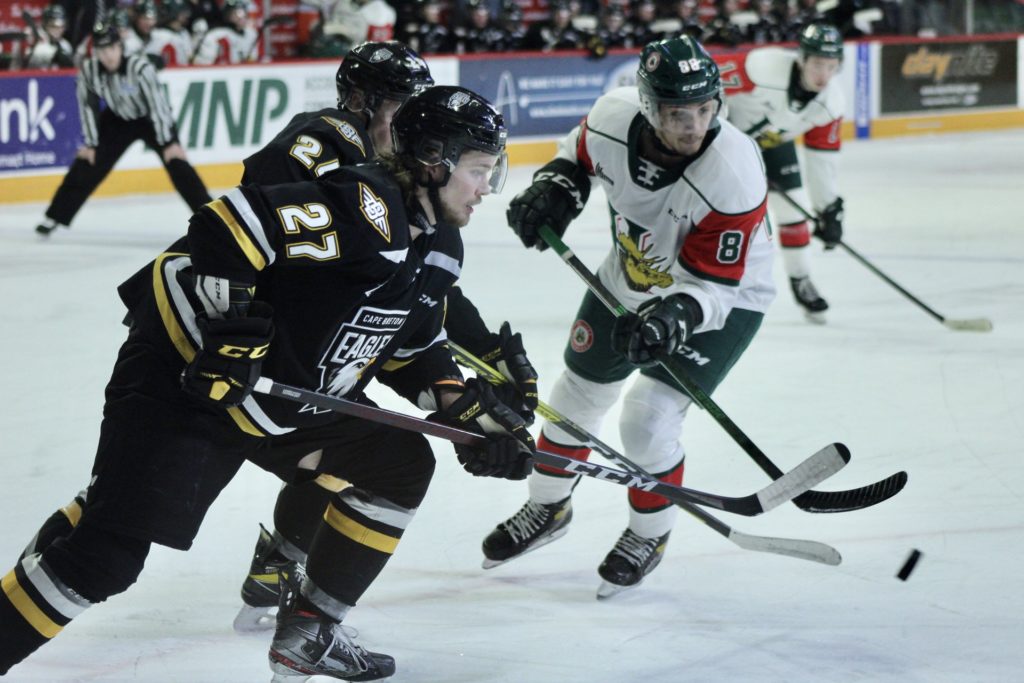 The Mooseheads and Eagles put on a great show at Scotiabank Centre on Sunday afternoon as Cape Breton pulled out a 4-3 win thanks to a third period goal from Nathan Larose.

Halifax gave their fans one of the best efforts seen on home ice in several weeks as the team used speed and creativity on offense, backed up by some strong defensive play that made for an exciting battle. After fighting back from a 2-0 deficit to enter the third period in a 3-3 tie, it looked like all signs were pointing to a victory for the Herd but a string of events early in the final stanza changed the outcome.

With the Mooseheads carrying the play and creating plenty of opportunities, the momentum got flipped around in a hurry when rookie James Swan had a goal called back on a play that was determined as offside after a lengthy review by the officials. The no-goal came 5:03 into the final period of regulation and would have given Halifax a 4-3 lead.

Cape Breton reversed the script 100 seconds later when Alexis Gravel was knocked backwards into his crease and never quite got back in position before Nathan Larose came out from behind the net to tuck one between Gravel’s skate and the post. The Moose players didn’t play with the same gusto after the tally that they had shown throughout the majority of the game.

Bobby Orr was a huge story for the Herd as he scored a pair of goals, including one on a penalty shot to get the home team on the board. His second goal came on a deflection at the side of the net on a high point shot by Justin Barron that tied the game at 3.

The Mooseheads dominated at times in the first period but had nothing to show for outshooting the Eagles 17-9 as Dawson Stairs scored off a turnover and call-up Trey Surge added another to put the visitors up 2-0 after 20 minutes. Orr drew his penalty shot with the Moose on a penalty kill of their own when he was tripped up at centre ice with nothing but clear sailing between him and goalie William Grimard. Cape Breton quickly bounced back to restore the two-goal advantage when Emile Hegarty-Aubin made it 3-1 just over a minute later. The Herd kept the pressure coming though and Zack Jones picked up his third of the season to cut the Eagles lead to 3-2 then it was Orr’s second of the night only 43 seconds later to cap off a flurry of action.

The 17-year-old Orr is enjoying a strong season in his NHL Draft year and has 10 goals and 10 assists in 26 games played.

There was more unfortunate injury news for the Mooseheads who lost import forward Attilio Biasca to a lower body injury just a few shifts into the game. He was being reassessed after the game and is expected to be day-to-day.

The loss drops Halifax’s record to 8-13-3-3 through 27 games of the 2020-21 season. The Herd will make visits to Cape Breton on Tuesday and Friday of this upcoming week before returning to Scotiabank Centre ice next Sunday at 3pm vs Charlottetown.