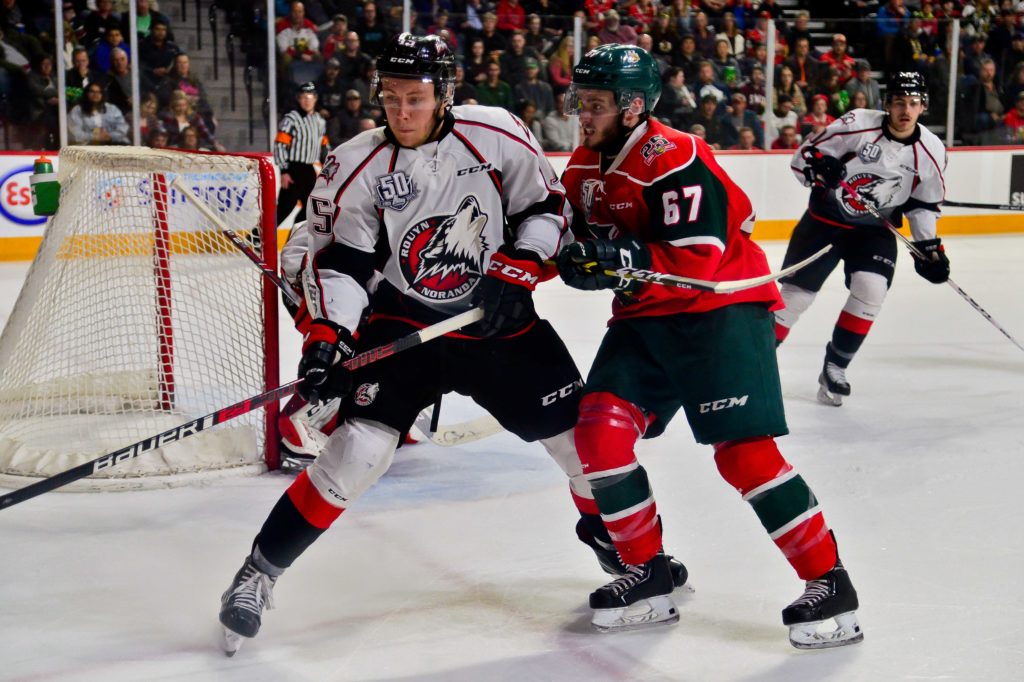 It has been a series that has seen swings of back and forth, and on Monday night it was Rouyn-Noranda who moved back in front 2-1 in the best-of-seven President Cup Finals with a 5-2 victory at Scotiabank Centre.

The Huskies, who won the opening game by the same score, got two goals each from Justin Bergeron and Joel Teasdale and never trailed in the game that saw them score three times in the first period and once in each of the second and third periods.

“Those goals they scored were pretty nice mistakes that could have been avoided or prevented,” Mooseheads Head Coach Eric Veilleux said.

The Herd bench boss doesn’t plan on dwelling on the defeat and instead is focused on having his team fight back to tie the series on Tuesday night.

“The game is over, it’s too late now. You can’t bring that game back and just need to get ready for tomorrow.”

Joel Teasdale opened the scoring when he easily got around Halifax defenceman Justin Barron and beat Alex Gravel while Patty Kyte watched helplessly in front of the net. Kyte had his stick chopped out of his hands in neutral ice by the goal-scorer seconds before Vincent Marleau hit Tesdale with a pass.

The crowd of 8,012 made their voices heard with their biggest outburst of the night when BO Groulx slapped in a one-timer off a pass by Jared McIsaac to tie the game 1-1 at the 7:47 mark of the 1st period which led to a good momentum shift in favour of the home team. With the Moose buzzing, McIsaac, Raphael Lavoie and Arnaud Durandeau broke in on a three-on-one rush which featured some beautiful passing and left Durandeau with an open net to shoot at but he missed on the short side and it was only moments later that Rouyn-Noranda’s Justin Bergeron converted on a pass in front by Raphael Harvey-Pinard to make it a 2-1 game. The Bergeron goal came while the Huskies were shorthanded and hampered the good energy the Moose had built.

Rouyn-Noranda made it 3-1 with 5:48 to go in the opening period when they forced a turnover by Kyte who was attempting a point shot in the offensive zone. Harvey-Pinard carried the puck up the ice before feeding Noah Dobson who passed across to Bergeron who buried his second of the game with what turned out to be the game-winner.

The Mooseheads played a better second period and cut the deficit to one when Samuel Asselin came through on the power play by sliding in his own rebound to make it 3-2. However it turned out to be one of those nights where the bounces weren’t destined to go in Halifax’s favour. Cole Harbour’s Tyler Hinam scored off another turnover before the end of the period to regain the two-goal advantage for the Huskies 4-2.

“In the third period I thought we still had a few good chances that could have made it 4-3 so it’s not like our guys quit or anything. They capitalized on their chances and we didn’t,” said Veilleux.

Defensive play was the name of the game in the third period as Rouyn-Noranda clogged up the neutral zone and turned back the Mooseheads’ offensive efforts more often than not. Teasdale put home an empty net goal in the dying seconds after many fans had already made their way to the exits.g

Jared McIsaac had a pair of assists in the Halifax loss while Raphael Lavoie and Arnaud Durandeau also picked up helpers in the first home ice loss for the Moose since Game 2 of the Round 1 series versus the Quebec Remparts on March 23rd.

The shots were fairly even in the game with Samuel Harvey earning the win after stopping 31 of 33 while Gravel made 30 saves on 34 shots.

The Mooseheads had Jocktan Chainey back in the lineup after the defenceman missed Game 2 with an upper body injury. He was paired with his usual partner Jake Ryczek. The Huskies played without defenceman and Alternate Captain Jacob Neveau who was hurt in Game 2 on Friday.

Game 4 will be played on Tuesday night in Halifax at 8pm. Tickets are on sale now at the Ticket Atlantic Box Office, select Superstore outlets, TicketAtlantic.com, the Official Mooseheads Shop in Scotia Square Mall or charge by phone 902-451-1221.