L’Heureux stars in return to lineup 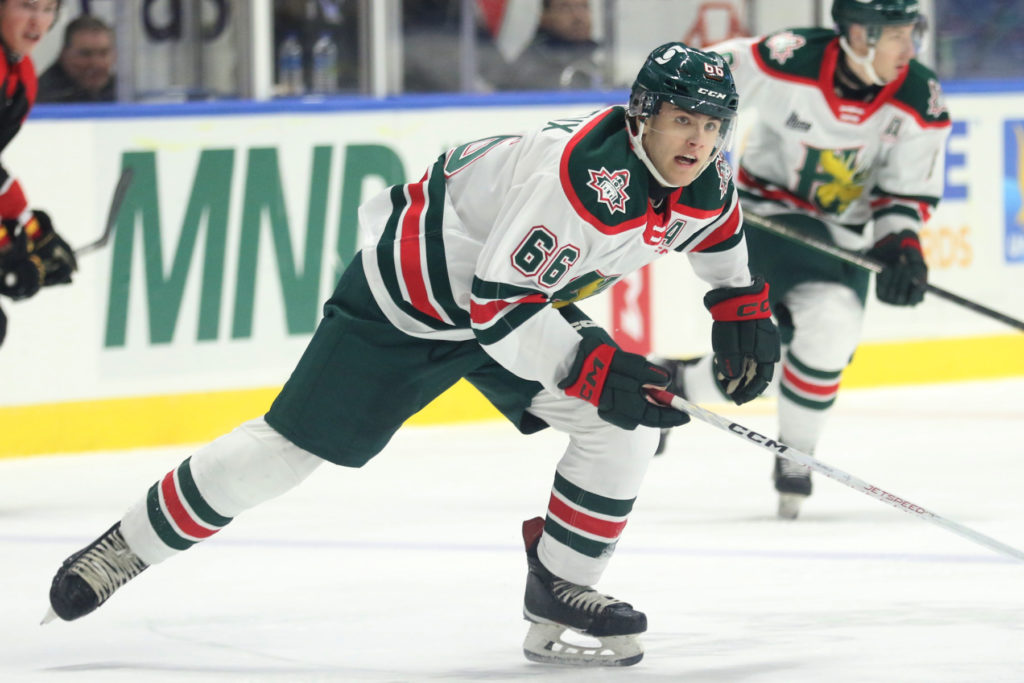 It was a welcome sight to see jersey number 66 skate onto the ice for the Mooseheads when they hit the ice in Cape Breton on Friday night after Zach L’Heureux had missed the first 22 games of the season while recovering from surgery to repair a sports hernia.

The Nashville Predators prospect lined up alongside Markus Vidicek and Attilio Biasca and led the charge in a 6-2 Mooseheads victory at Centre 200 by contributing one goal and one assist in his first game back with the club. He was named the first star of the game as Halifax improved to 14-6-2-1 one night after falling 4-3 at home to Val d’Or.

Six different players found the back of the net as the Herd piled up 41 shots on goal in the first game of a five-game road trip that will keep the team away from Scotiabank Centre for two weeks. Evan Boucher got the scoring started for the Moose by extending his hot streak to five straight games with a goal. The Timmins, ON native has seven goals and nine points during that stretch and has helped to add another major weapon to the offense since returning from injury on November 12th.

It was a big day for sniper Jordan Dumais who signed his Entry-Level contract with the Columbus Blue Jackets before picking up a pair of assists in the win. Dumais became the first player in the Canadian Hockey League to surpass the 50-point plateau this season and now leads the nation with 51 points. He has a 13-point lead atop the QMJHL scoring race with no signs of slowing down. The two points tonight pushed him past current Columbus Blue Jackets veteran Jakub Voracek and into a tie with Raphael Lavoie and Brent Andrews for 14th in franchise history with 189 career points.

The Eagles had goals from Thomas Desruisseaux and Xavier Daigle. Nicolas Ruccia got the start in goal but was chased after allowing five goals on 26 shots in just over 33 minutes of action. Oliver Satny took over and stopped all 14 shots he faced.

Defenceman Cam McKenzie was called up from the Pictou County Weeks Crushers of the Maritime Junior A league and made his QMJHL debut for the Mooseheads. The undrafted McKenzie of Eastern Passage, NS was added as an affiliate player near the end of training camp. He filled in on a back end that was missing Cam Whynot due to an illness and Dylan MacKinnon who remains out with an upper body injury. MacKinnon has missed the last three games with the injury. Forward Jake Todd also sat out with an upper body injury.

Halifax will continue the road trip on Sunday afternoon at 4pm in Moncton before taking off for the province of Quebec where they will make stops in Rimouski, Chicoutimi and Baie-Comeau.

The next home game for the Herd is set for Thursday, December 8th vs Blainville-Boisbriand and they will also host the Gatineau Olympiques for the Teddy Bear Toss game in support of Ronald McDonald House Charities on Saturday, December 10th at 7pm. Tickets are on sale now at TicketAtlantic.com.