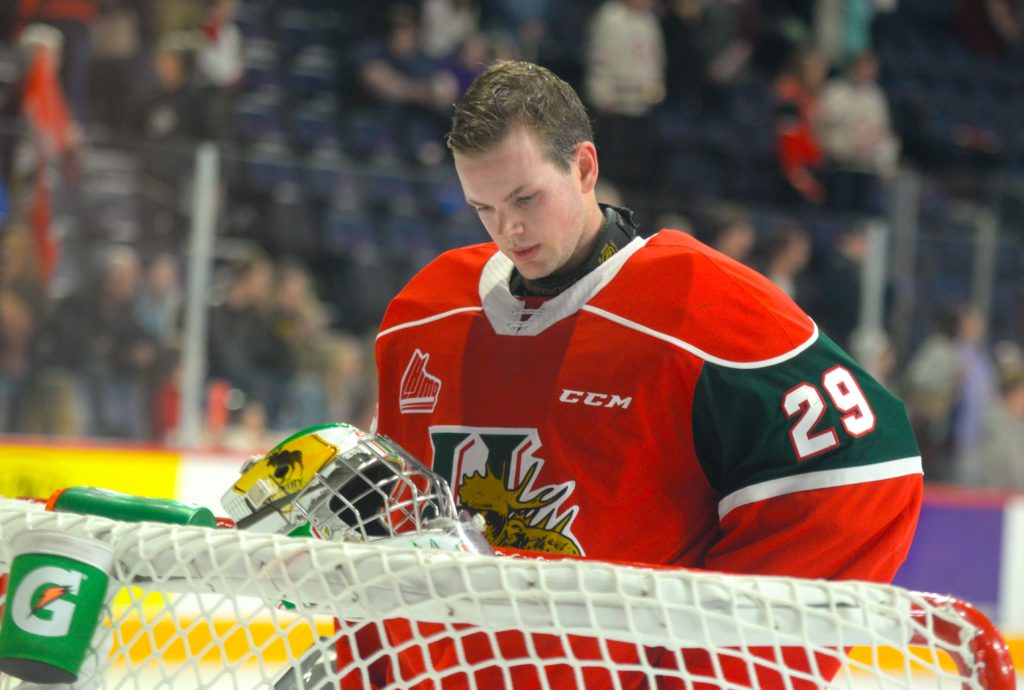 Make it three wins in a row for the Halifax Mooseheads following a 4-2 victory on Friday night in Moncton.

The Mooseheads (5-4) are over the .500 mark for the first time this season and did so by making their second comeback in as many nights. Raphael Lavoie scored twice and Cole McLaren was nearly unbeatable with 46 saves as the Herd scored four unanswered goals to snap the Wildcats four-game winning streak despite being out-shot 48-22 by Moncton.

The big line of Lavoie, Benoit-Olivier Groulx and Maxim Trepanier provided all of the scoring as the trio combined for six points in the game and McLaren made the lead stand up. The goalie was especially crucial during the final five minutes of the game when Moncton was handed a lengthy two-man advantage along with another power play immediately after the Mooseheads killed the two penalties to Trepanier and Groulx. McLaren did his job to a perfection and Lavoie iced the game with an empty net goal at the 18:58 mark with the Cats on the power play and their goalie on the bench in favour of the sixth skater.

Halifax was shorthanded a total of eight times against the QMJHL’s number one power play unit while the Moose only had one man advantage of their own. Moncton’s first two goals came on the power play in the first period when Jacob Hudson and Elliot Desnoyers scored 1:44 apart but McLaren slammed the door shut the rest of the way.

The visiting Herd cut into the 2-0 deficit at the 15:21 mark of the opening period when Lavoie wired in a hard wrist shot from the circle and the Mooseheads tied the game 2-2 before the period ended as Trepanier banged a rebound off of goalie Olivier Rodrigue with only 10 seconds remaining on the clock. There was no scoring in the second period and Halifax took the lead for the first time when Groulx deflected a point shot by Patty Kyte at 3:29 of the final stanza. Penalty killing was the story in the final stages of the game and Lavoie sealed the win with his empty net goal. He leads the Mooseheads with 13 points this season and has 11 points during a six-game points streak. BO Groulx has found the score-sheet in all five games he has played so far and has collected seven points while Trepanierhas six points in his last three games.

The Mooseheads will put their three-game winning streak on the line Sunday afternoon on home ice at Scotiabank Centre when they host Val d’Or at 3pm. Tickets are on sale now at the Ticket Atlantic Box Office, TicketAtlantic.com, select Superstore outlets or by phone 902-451-1221.