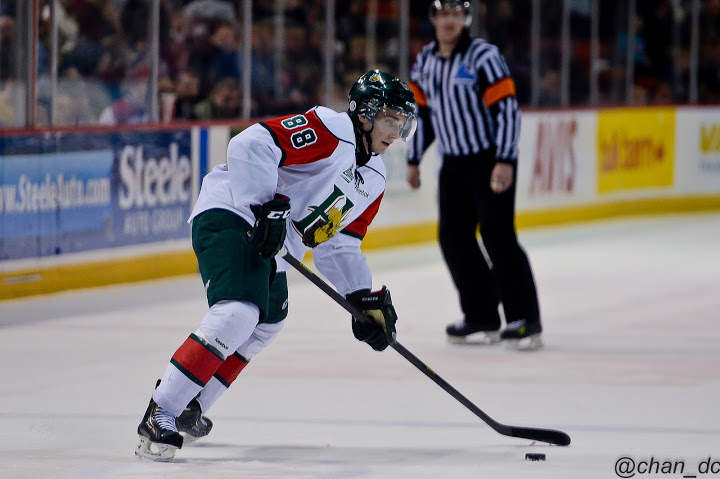 Portland’s Ty Rattie ripped a wrist shot over Zach Fucale’s shoulder with 1:16 left in the Memorial Cup final to narrow the Mooseheads’ lead to 5-4. Coach Dominique Ducharme sent co-captain Trey Lewis and 18-year-old Austyn Hardie over the boards to man the blueline. With 25 seconds on the clock Hardie blocked a pass from Portland’s Nic Petan then outmuscled the WHL’s leading scorer along the boards and tapped a short pass to Ryan Falkenham who found Nathan MacKinnon for the Cup-clinching empty net goal.

MacKinnon told the media after the game, “I might never score a bigger goal in my life.” Mooseheads fans can assume that Hardie’s last minute helper will be the biggest assist of his life.

Austyn Hardie was drafted in the first round of the 2010 QMJHL draft by Chicoutimi. Rather than join the Sagueneens he returned to Midget AAA in Quebec. Mooseheads GM Cam Russell, always a big fan of Hardie, engineered a trade with Chicoutimi one year later. Halifax had acquired a stay-at-home defensemen who would be a big part of the Mooseheads’ success over the following four seasons.

Austyn Hardie is now a second year student-athlete at St. Mary’s University. He answers questions while staring at his Memorial Cup ring and watch that sit on his desk. He completed seven university courses while a member of the Mooseheads. Because of the coursework he completed while playing junior he might decide to finish his business degree in 3 ½ years instead of four.

A lot of Halifax Mooseheads players choose to stay in Halifax after their junior hockey playing days are over. They graduate from one of the local universities and do not want to leave the city that has become home while they are teenagers and young men in their early twenties. Interestingly, Austyn Hardie’s parents so enjoyed their time in Halifax visiting their son and watching him play hockey that both Austyn’s mother and father left Montreal to continue their careers in Nova Scotia’s capital. We’re proud to have the entire Hardie clan calling Halifax home.