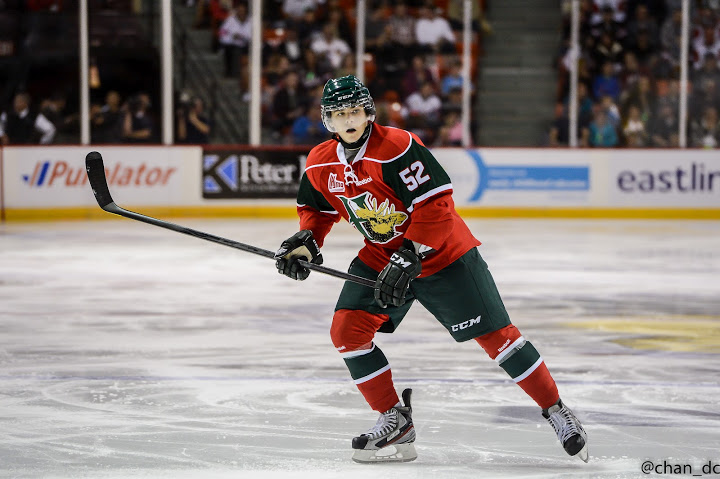 Call it what you want; hockey sense, hockey IQ, hockey smarts or an “ability to think the game.” Mackenzie Weegar has it.

Weegar arrived at the 2012 Mooseheads training camp with something to prove. He had been passed over in the Ontario Hockey League draft by every team….twice. He spent his 16-year-old season playing Junior B with the Winchester Hawks of the Eastern Ontario Junior Hockey League. The following season he moved up to Junior A with the Nepean Raiders of the Central Canada Hockey League.

The right-handed defenseman turned out to be exactly what the Mooseheads needed. Weegar could play on the powerplay and in shorthanded situations and there was a nasty side to his game. He recorded an eye-popping, QMJHL best +55 in even strength situations during the Mooseheads’ championship season. He was the team’s second leading scoring defenseman with 8-36-44 totals in 62 games. It was a rare game when Weegar did not log more than 20 minutes of ice time. He would be the only Mooseheads rookie to play regularly at the Memorial Cup.

Following the Memorial Cup the Florida Panthers selected Mack in the 7th round of the 2013 NHL draft. He returned to the Mooseheads for his final season of junior hockey and was one of the top players in the league. Weegar again led the team’s +/- ranking, this time with a +56. The 19-year-old was the club’s top scoring defensemen with 12-47-59 totals in 61 games.  He registered 5-17-22 in 16 playoff games. Weegar was a second team All-Star and played for the QMJHL in the annual Super Series against Team Russia.

Mack is currently a member of the AHL’s Springfield Thunderbirds. The 22-year-old is right on schedule to develop into a good NHL defenseman.