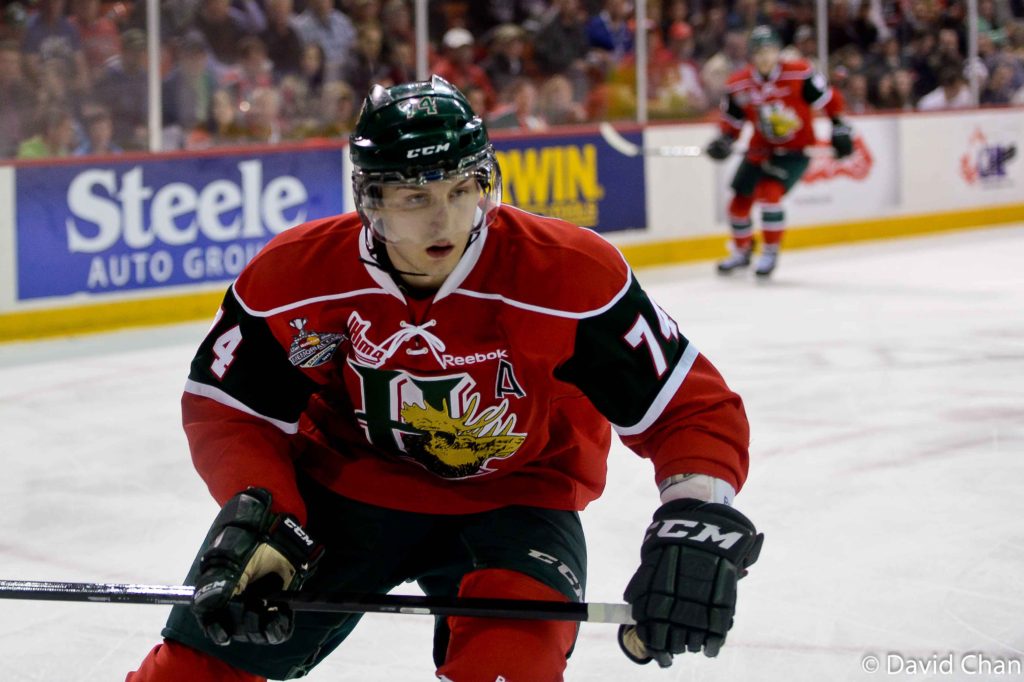 The 2011-12 Victoriaville Tigres were ready to take a serious run at the league championship. The club had finished third overall with a record of 44-18-6. Nobody expected the Tigres to lose four straight in the opening round of the playoffs. After the crushing loss Victoriaville shifted to rebuild mode and went about trying to trade some of its nine 19-year-olds since they could only bring three of them back as overagers.

Mooseheads GM Cam Russell secured the rights to 6’3”, 225 lb. Stefan Fournier in exchange for third and eighth round picks in the 2012 draft. This trade would pay great dividends.

Fournier made an immediate impression on the Mooseheads. Management and the coaching staff recognized his leadership by naming him and Trey Lewis co-captains. Fournier proceeded to have his best year in the QMJHL racking up 35-37-72 in 66 games. He also spent 100 minutes in the penalty box. Stefan was not shy about coming to the defense of younger and smaller superstars Nathan MacKinnon and Jonathan Drouin.

The big right winger really proved his worth during the playoffs. Fournier led the Mooseheads with 16 goals in 17 games. He also added to his PIM total spending 31 minutes in the box.

Perhaps Fournier’s most memorable moment as a member of the Mooseheads came during the finals against Baie Comeau. Late in Game 2 a Drakkar defender crashed MacKinnon into the boards with a hit from behind. Fournier’s gloves were off in an instant and a spirited bout ensued. 10,595 fans were on their feet madly cheering Fournier’s gallantry. Nobody was applauding more enthusiastically than Nathan MacKinnon. As Fournier made the long skate from the Baie Comeau zone MacKinnon gave Fournier the obligatory tap on the shin pads. Fournier responded with a heartfelt hug and was that a kiss? Yes it was. Hey, these guys were brothers and they were in the process of making history. Why not!