Money in the clutch. Raphael Lavoie adds to his lore 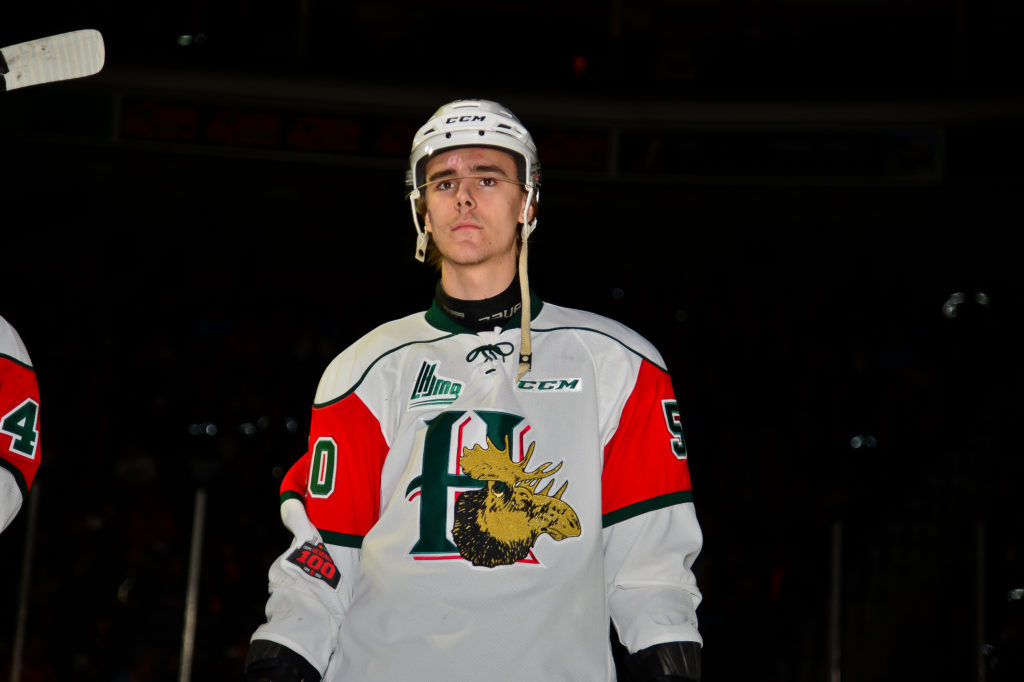 Head Coach Jim Midgley summed up what everyone in Moose Country is saying these days shorty after the Mooseheads earned a comeback 3-2 overtime victory in Charlottetown on Wednesday night.

Second-year forward Raphael Lavoie continued his breakout season with yet another huge goal when he scored the winner at the 1:09 mark of the extra period at the Eastlink Centre. The Chambly, QC native got the puck from Arnaud Durandeau at the top of the circle on the right side and skated all the way around behind the net and back out the other side before firing his 26th goal of the season behind goalie Matt Welsh to end it. That is 10 game-winning goals for Lavoie and his sixth in overtime.

“Raph wants to score and be a difference maker. He has shown that he is a game breaker. When he gets a step on a guy and uses his big frame, he is very tough to defend,” Midgley said.

The Mooseheads had to dig themselves out of a hole to grab their 38th win of the season. Charlottetown got early second period goals from Daniel Hardie and Nikita Alexandrov to stake the Islanders to a 2-0 lead. The hometown Isles seemed to have the game in control and Halifax was down and out when Benoit-Olivier Groulx was given a five-minute major and a game misconduct at 13:55 of the middle period. A big scrum ensued behind the Charlottetown net and the teams played four-on-four hockey. However that’s when things took a turn for the better for the Herd.

With a little more space on the ice, Otto Somppi got his club on the board 23 seconds into the four-on-four action when he deflected a Justin Barron shot following some excellent work by the young defenceman and the Islanders lead was cut in half 2-1. That was the score after 40 minutes and coupled with some momentum gained from the penalty kill and some timely saves by Alex Gravel the Mooseheads were back in business.

Halifax and Charlottetown traded chances during the third period and the Islanders survived a brief scare when they had to change goalies for a four-minute span when Welsh left to have a skate blade replaced. Charlottetown carried the play while Welsh was frantically being tended to by equipment manager Andrew MacNeill. Dakota Lund-Cornish only needed to make two saves before leaving to a big round of applause from the Islanders fans.

The cheers turned silent less than two minutes later when first star Otto Somppi struck for his second goal of the night at the 14:45 on another great play by Justin Barron and the game was tied 2-2 with 5:15 to play. Coach Midgley couldn’t say enough about his young defenceman after the game when Barron was named the second star.

“JB is a world-class skater. He has very high end hockey sense and when you put those two things together it is a great combination.”

Time ticked down as it was evident the teams were head for extra time. It was the 17th time this season the Mooseheads have participated in an overtime battle and ninth since the start of 2018. Lavoie did his thing and he has entrenched himself in Mooseheads history with his ability to come through in the clutch. Halifax now sits at 38-13-6-1 and increased the Maritimes Division lead to six points over idle Acadie-Bathurst.

The two tallied by Somppi give him seven goals and 10 points in his last four games. He is now third in QMJHL scoring with 75 points which is 29 more than his career best 46 set back in his rookie season. Jocktan Chainey also earned assists on Somppi’s game tying goal and Lavoie’s winner. Alex Gravel earned the win with 27 saves. Welsh took the loss with 32 stops.

The Mooseheads return home to battle the Gatineau Olympiques on Saturday afternoon at 4:30 in a game that will be part of Sportsnet’s CHL Saturday Showcase.  The Herd will also entertain the Drummondville Voltigeurs on Sunday at 3pm in another battle between two teams in the top five of the QMJHL. The team will have the Memorial Cup Trophy on hand for fans to view and take pictures with during both games. Tickets are on sale now at the Ticket Atlantic Box Office, select Superstore Outlets, TicketAtlantic.com, the Official Mooseheads Shop in Scotia Square or call 451-1221.