Monster Night for Lavoie in Moncton with Team QMJHL 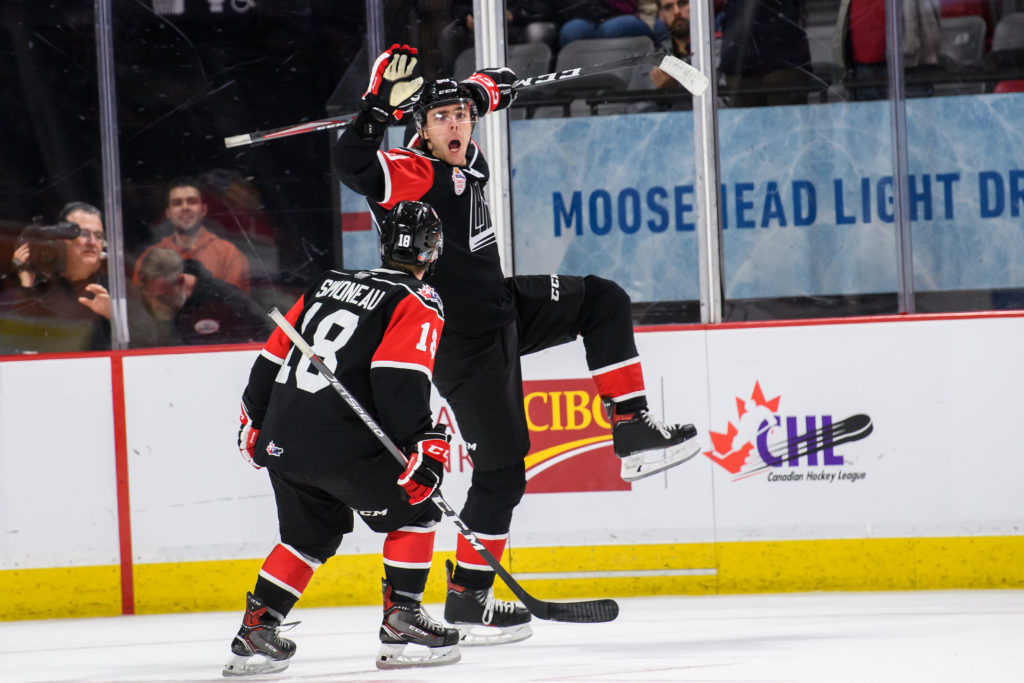 Halifax Mooseheads star sniper Raphael Lavoie was the QMJHL hero on Tuesday night in Moncton as he scored twice, including the overtime winner and added an assist in a 4-3 victory over Team Russia.

Lavoie took a jab back at Russian counterpart and Moncton Wildcats star forward Alexander Khovanov with an arm flapping celebration after ripping a shot from the slot to end the game 1:58 into the extra period. Khovanov famously imitated moose antlers when he scored in overtime in Halifax last month for the Wildcats.

This time the Mooseheads player celebrated in the visiting rink but actually had the fans in Moncton cheering as the QMJHL picked up two points in their final game of the Canada-Russia Series before the event shifts to the OHL. Lavoie’s three points earned him Player of the Game honours for the Q as the Edmonton Oilers prospect finished with four points in his two games played.

How we celly in Moncton https://t.co/Zx3xiNDT8L

He opened the scoring early in the first period when he carried the puck in from the blueline end fended off the Russian defenders to beat goalie Amir Miftakhov just 1:44 after the game began. Cape Breton’s Egor Sokolov tied the game with less than 15 seconds remaining in the first period when he went hard to the net and got one by Olivier Rodrigue.

Nathan Legare of the Baie-Comeau Drakkar regained the QMJHL lead 2-1 in the second period before Russia jumped ahead 3-2 on back-to-back tallies by Dmitry Zavgorodniy and Maxim Groshev. Then it was Lavoie who played setup when he and linemate Jakub Pelletier of the Wildcats helped create the tying goal by Dawson Mercer. The Drummondville forward Mercer, was named the Player of the Game on Monday in Saint John when he had a goal and an assist.

BO Groulx of the Mooseheads served as QMJHL Captain in the series and was huge in the face off circle by winning 13 of 16 in the overtime victory. Final shots in the contest were 34-28 QMJHL while both teams went 0-1 on the power play.

Groulx, Lavoie, Justin Barron and Alex Gravel will return to Halifax on Wednesday to prepare for Friday night’s DND Appreciation Game at home versus Drummondville. The team will wear special jerseys to honour the 50th anniversary of the tragedy on board HMCS Kootenay in 1969. Funds raised through the jersey raffle go to the Camp Hill Veterans’ Memorial Garden at the QEII Health Sciences Centre.

On Saturday night the Mooseheads will entertain the Acadie-Bathurst Titan at Scotiabank Centre. The team has partnered with Q104 and the Parker Street Food & Furniture Bank to help our with a Christmas Toy Drive. Halifax Professional Firefighters, Q104 staff and Parker street staff will be at the rink as you enter the doors, collecting cash and new unwrapped toys for kids who could really use a little Christmas cheer.