Moose Don’t Back Down in Val d’Or 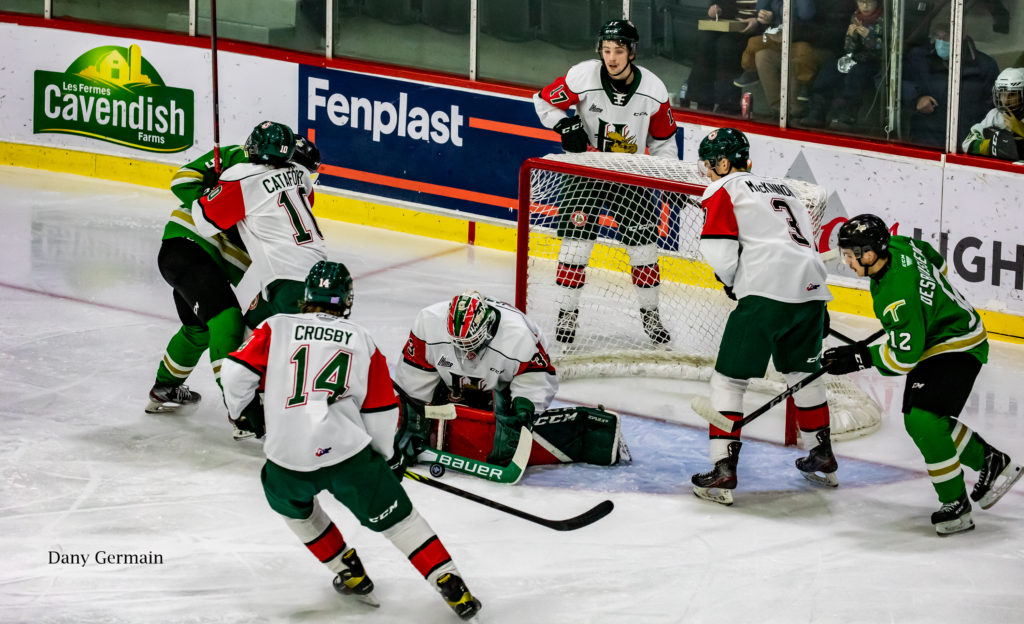 The visiting Halifax Mooseheads played a game of resilience in Val d’Or on Thursday night as they captured the 900th win in franchise history with a 5-3 defeat of the Foreurs.

Mathieu Catford and Attilio Biasca scored third period goals to help Halifax pull out of a tie game and secure the two points to kick off a three-game road trip through northern Quebec. Brady James was outstanding in the final period with 20 saves while kicking aside a total of 47 in the contest as the home team fired 50 shots on net. The Mooseheads had goals from five different players to improve their record to 10-6-0-1 before visiting Rouyn-Noranda on Friday and Gatineau on Sunday.

Halifax fell behind early in this one when Jason Desruisseaux stunned the Herd just 13 seconds after the opening puck drop for a 1-0 Foreurs lead. That goal woke the Mooseheads up and rookie Vincent Gauthier quickly responded with his second career tally at the 2:24 mark to tie the game 1-1. The visitors kept coming and held an 11-1 edge in shots at one point while Jordan Dumais and Bobby Orr increased the lead to 3-1 by the end of the first period. The Orr goal was another beauty of a play involving his linemates Dumais and Elliot Desnoyers and extended the goal scoring streak to four games for the Carolina Hurricanes prospect. He has six goals during that span.

The middle period was lackluster for the Moose as they battled some consistency issues and Brady James allowed a pair of goals as Val d’Or worked their way back into a tie game 3-3. The Foreurs looked to have momentum on their side on home ice going into the final 20 minutes of regulation and threw everything they had at James but the goalie came through in the clutch as did Mathieu Catford who put Halifax in front 4-3 just 80 seconds into the period. Attilio Biasca gave his squad a little breathing room at the 10:10 mark by making it 5-3 and James took care of the rest.

In addition to his goal, Dumais had an assist to bring his total to 20 helpers on the season. That’s good for second most in the QMJHL. Other assists came from Markus Vidicek, who has points in five straight games, David Lafrance, Zac Beaugregard, Elliot Desnoyers, Zack Jones, Senna Peeters and James Swan. Swan chipped in on Cataford’s game-winner with Peeters for the first point of his season which has seen a couple of stints on the injured list so far.

The Mooseheads once again played without the services of forward Zach L’Heureux who served game number two of a four-game suspension while forward Landon Miron and defenceman Alex Tessier were the healthy scratches.

Zac Beauregard dropped the gloves with Frederic Potvin early in the second period as the 5-foot-6 Beauregard knocked the 6-foot-3 Potvin down in a very quick fight.

The Mooseheads will face their old foes from Rouyn-Noranda Friday night at 8pm ADT before the trip finishes in Gatineau on Sunday at 4pm ADT.