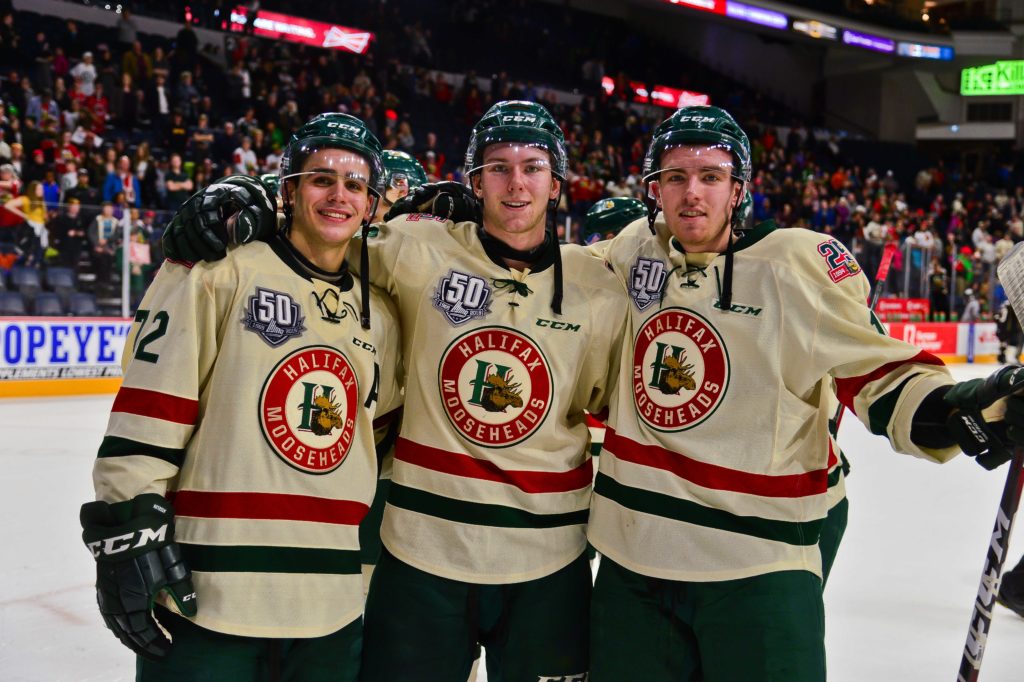 The Halifax Mooseheads didn’t pick up the win on Saturday night, but it was still good news as they dropped a 3-2 shootout decision to the Charlottetown Islanders.

Despite the loss, the one point earned turned out to be all that was needed to clinch first place in the Eastern Conference as Baie-Comeau fell 4-1 to Rimouski leaving the Mooseheads and Drakkar tied with 102 points to finish the season. Thankfully, Halifax held the tie-breaker which is the sum of regulation and overtime wins combined.

The first place Mooseheads will square off against the Quebec Remparts in round one of the QMJHL’s President Cup Playoffs beginning Friday night at Scotiabank Centre at 7pm. Click here for the complete series schedule.

Saturday’s game began with a touching ceremony to honour the three graduating players. A video tribute for Keith Getson, Samuel Asselin and Jake Ryczek was shown before GM Cam Russell came on the ice with Getson’s parents, Asselin’s father and Ryczek’s billet parents where the players were presented with a canvas print of themselves in a Mooseheads uniform.

From the drop of the puck it was an intense matchup all the way through regulation time as a second straight sell out crowd of 10,595 watched intently, with one eye on their team and the other on the out-of-town scoreboard. Getson got the Herd rolling early with a goal against his former team just 1:54 into the first period when he deflected a Jake Ryczek shot past goalie Matt Welsh. The Bridgewater, NS native who was acquired from the Islanders in December, talked about playing his final regular season game of his junior career and scoring a big goal against his old team.

“My first game in a Mooseheads uniform was also against Charlottetown so it’s been kind of a weird (series) of events there but it was a nice way to end it.”

Halifax seemed to be riding the wave of energy in the building in the opening period and were dictating the play after the Getson tally. They struck again at the 7:30 mark when 2020 NHL Draft eligible prospect Justin Barron showed off his skating ability to the national Sportsnet audience as he went coast to coast and put on a clinic before shooting the puck past Welsh to make it 2-0.

The game was extremely physical in the first period and the teams took turns heading to the penalty box and there were plenty of post whistle activities in what felt like a true playoff atmosphere. The Islanders were doing everything possible to hang onto fourth place and home ice in the first round of the playoffs and were able to do so with the victory.

Charlottetown didn’t like what they saw on the scoreboard with Halifax ahead 2-0 after 20 minutes and changed their game plan in the middle stanza. The Isles bottles up the Moose and had the home team on their heels by out-shooting Halifax 21-11 in the period. Hunter Drew jumped on a loose puck in the circle at 5:36 and fired one over Alex Gravel to cut the Moose lead to 2-1. Charlottetown pulled even later in the frame when Nikita Alexandrov netted the equalizer. Play tightened up on both ends the rest of the way which led to overtime and then a shootout where Daniel Hardie had the only goal to give the Isles a 3-2 victory.

The Halifax Mooseheads (49-15-2-2) will face off with the Quebec Remparts (27-28-7-6) in the first round of the 2019 President Cup Playoffs following their first place finish in the Eastern Conference standings.

The series will be a 2-3-2 format given the distance between the two cities.

Halifax will host the first two games and the final two games if necessary. All games will begin at 7pm local times.

Individual Playoff tickets will go on sale Tuesday morning at 11am at the Ticket Atlantic Box Office, select Superstore Outlets, TicketAtlantic.com, the Official Mooseheads Shop in Scotia Square or charge by phone 902-451-1221.