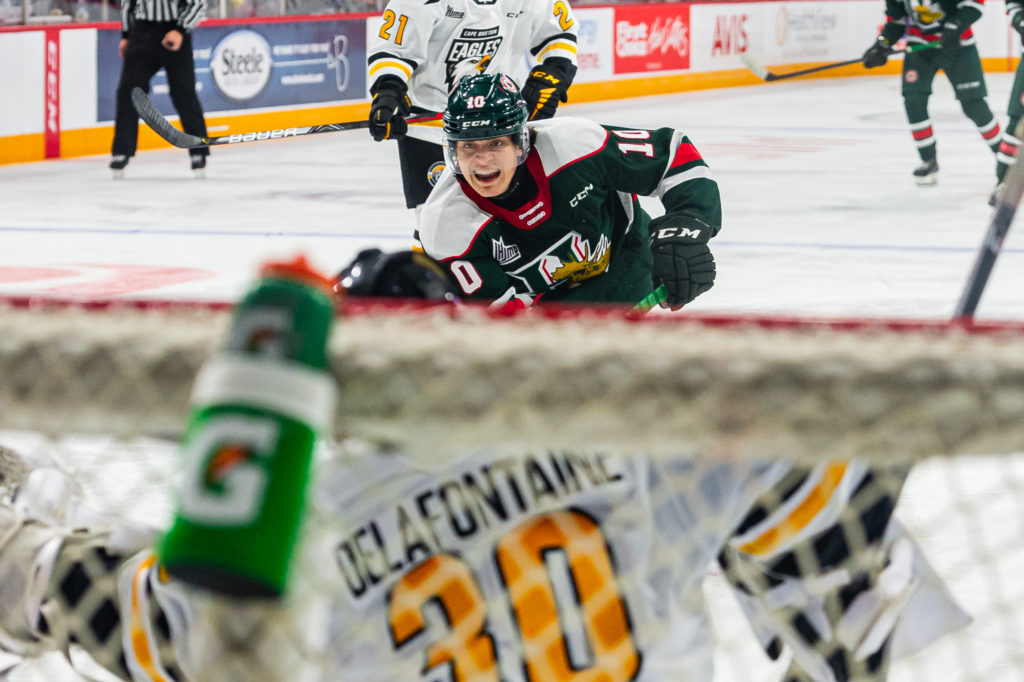 The puck was still several minutes from dropping and the Home Opener crowd in Halifax was already blowing the roof off of the Scotiabank Centre on Saturday night as a gathering pushing 6,000 sounded more like 10,000 in their eagerness to watch the Mooseheads square off with Cape Breton.

The fans had the energy level high and gave the young Herd the ovation they had been missing for the past several months during the pandemic. The result wasn’t what the team or the fans wanted with a 4-3 shootout loss to the Eagles, but the story was the fact that hockey was back to stay in Halifax.

The provincial rivals were facing off for the second time in as many nights after the Mooseheads edge Cape Breton 3-2 Friday in Sydney and they put on another great show in downtown Halifax. Brady James was a key factor in keeping the game scoreless for the first 24:22 until Matthew MacDonald put on in on a nice cross crease play to give the Eagles a 1-0 advantage.

The fans didn’t need to stay quiet for long as the Mooseheads answered right back just 17 seconds later on the first career goal by 16-year-old rookie Vincent Gauthier. The forward was a second round pick (37th overall) in June and scored his first by batting in a waist high puck at the top of the crease. Zac Beauregard had an assist as did Logan Crosby who picked up his first career point on the play.

Cape Breton regained the lead with only 19 seconds remaining in the middle period on a Connor Trenholm tally to put the visitors in the driver’s seat heading into the final 20 minutes of regulation. It didn’t take long for Halifax to pull back to even footing however as Markus Vidicek roofed a shot over the shoulder of goalie Remi Delafontaine to tie the game at 2. That goal came 1:56 into the third period on the power play. The Mooseheads would later grab their first and only lead of the night at the 13:25 mark as rookie Mathieu Cataford had his own special moment with his first career goal and the Mooseheads bench and fans erupted in delight. Unfortunately Sean Larochelle had other ideas and came up with a late power play goal to tie the game 3-3 and force overtime.

The extra period didn’t solve anything and Ivan Ivan scored the only goal out of six players in the shootout to give Cape Breton the win.

Halifax will next face the Islanders in Charlottetown on Friday night before a return engagement with the Isles at Scotiabank Centre on Saturday, October 9th at 7pm. Tickets are on sale now at TicketAtlantic.com.