Moose show they are a team on the rise in Moncton 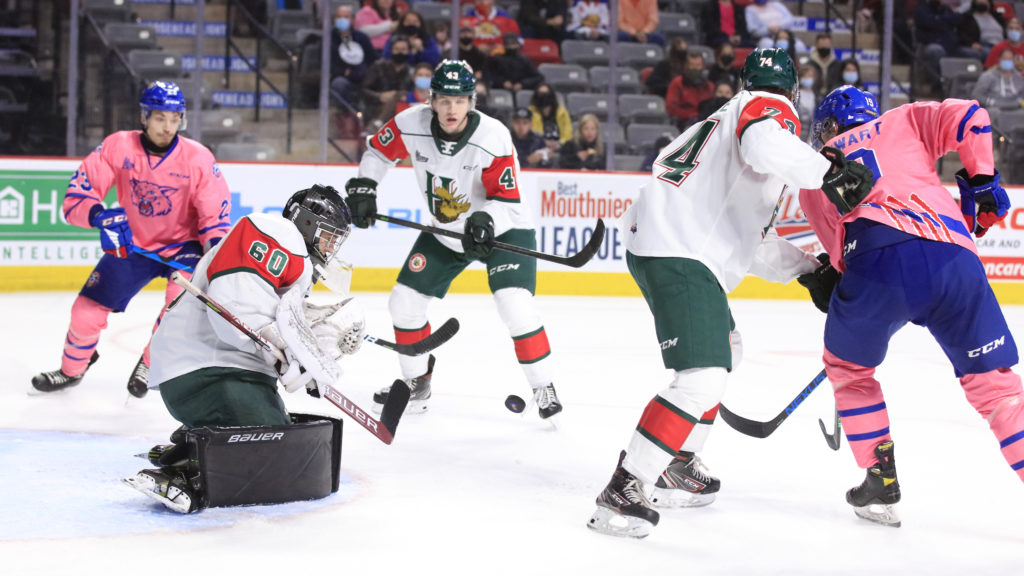 Rookie goalie Mathis Rousseau was perfect on Sunday in Moncton as the 17-year-old stopped all 29 shots he faced from the Wildcats to earn his first career shutout in just his second career start. The big game from the goalie backstopped the Mooseheads to a 4-0 victory and helped the team win a third consecutive game to improve to 4-1-0-1 early in the season.

The shutout victory by Halifax snapped a three-game winning streak by Moncton as the Mooseheads fired 32 shots and scored once in the first period, twice in the second and once in the third. The Moose have now won three in a row themselves, for their longest winning streak since taking five straight in October of 2019.

Defenceman Cam Whynot opened the scoring for the Herd on the power play when his point blast at the 14:26 mark of the first period beat goalie Vincent Fillion for what turned out to be the game-winning goal. The terrific chemistry on the top line continued again with Jordan Dumais, Zach L’Heureux and Elliot Desnoyers combining for five points to give them 17 in the past two games.

L’Heureux increased the Halifax lead to 2-0 early in the second period when he finished a nice passing play with Jordan Dumais on a give-and-go to light the lamp in his return to Moncton. It was the first time both L’Heureux and Desnoyers suited up at the Avenir Centre since their blockbuster trade to the Mooseheads prior to last season.

Sixth overall pick Mathieu Cataford continued to show why the Mooseheads were thrilled to get him in June by notching the second goal of his young career at the 11:20 mark of the middle period. He hustled behind the Wildcats net on the forecheck and forced a turnover before feeding the puck in front. David Lafrance eventually got possession and put a shot on net where Cataford was waiting to clean up the rebound. That tally made it a 3-0 game and with Rousseau playing lights out between the pipes, it appeared to be a tough hole to climb out of for Moncton.

The icing on the cake came when L’Heureux dangled his way to the net between defenders to create a scoring opportunity. The puck popped out to Jordan Dumais who buried his third goal in two games. Moncton had some big chances to get on the board in the final 20 minutes, including an opportunity on a lengthy two-man advantage but Rousseau was there to close the door time after time.

L’Heureux was named the first star, Dumais the second and Rousseau the third.

Halifax had brief injury scares to both Zac Beauregard and Elliot Desnoyers who were shaken up in collisions but won’t miss any time. Rookie and fifth overall draft pick Dylan MacKinnon was robbed of a chance to play in front of his hometown family and friends for the first time in his career. The Riverview, NB native suffered an upper body injury in Friday’s win over Shawinigan and left the game in the second period. He was held out again on Sunday and is listed as day-to-day.

Your Mooseheads are back in action on home ice for two straight days next weekend when they host Val d’Or on Saturday night at 7pm and Cape Breton on Sunday at 3pm at Scotiabank Centre. Tickets are on sale now at TicketAtlantic.com.