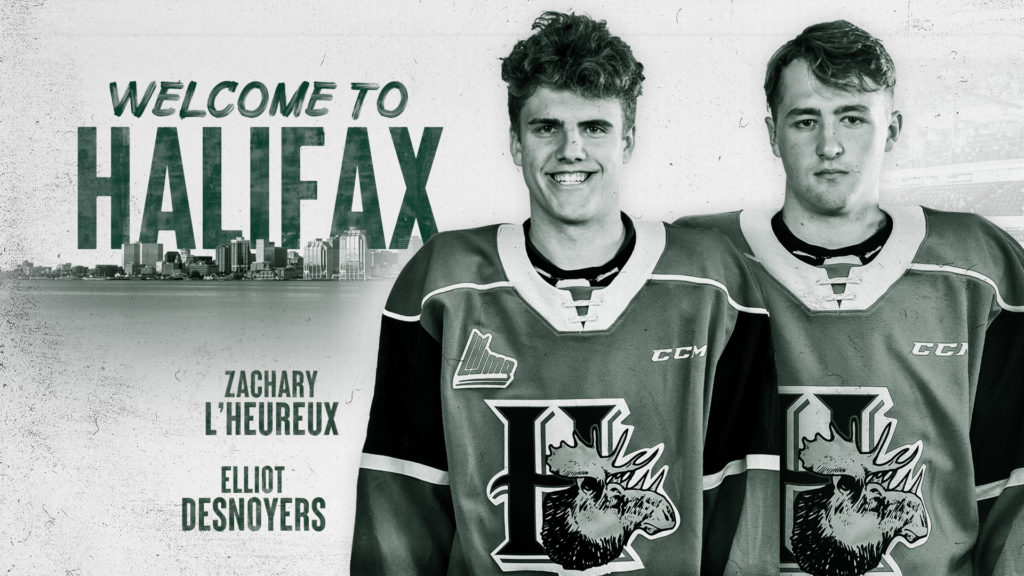 Halifax – The Halifax Mooseheads and General Manager Cam Russell made a big splash on Wednesday as the QMJHL Trade Period opened. Russell announced the acquisitions of forwards Zachary L’Heureux and Elliot Desnoyers from Moncton in exchange for five draft picks. The deal completes the earlier trades involving Benoit-Olivier Groulx and Jared McIsaac. Halifax sends 2nd and 3rd round picks in 2020 back to the Cats along with a 5th in 2021 and 2nd and 3rd round selections in 2022. The Mooseheads also hang onto the 2021 and 2022 1st round picks that came over via the McIsaac & Groulx deals.

L’Heureux burst onto the QMJHL scene last season after being made the third overall pick at the 2019 Entry Draft. He was a finalist for the QMJHL Rookie of the Year Award after tying for most points scored by a rookie with 53 points (20 goals, 33 assists). His point total was the highest by any 16-year-old player in the league and he has quickly become a highly touted player for the 2021 NHL Entry Draft. The native of Mercier, QC is 5-foot-10 and 196 pounds and plays a physical style as noted by his 70 penalty minutes. L’Heureux shoots left and predominantly played left wing last season. He had 11 multi-point games and scored 17 of his 20 goals during even strength situations.

Desnoyers will be entering his 18-year-old season and is also a former 1st round pick of the Wildcats after he was selected 18th overall in 2018. He is known for his leadership qualities that he will bring to the Mooseheads. Desnoyers is another left-handed shooting left winger who scored 35 points (11 goals, 25 assists) in 61 games last season. Of his 11 goals, five were game-winning. The Saint-Hyacinthe, QC native has a total of 66 points in 122 career regular season games. He is listed as 5-foot-10 and 178 pounds.

The QMJHL Trade Period ends at 1pm ADT today. The 1st Round of the QMJHL Entry Draft will be held online this Friday night at 7:30pm ADT where your Mooseheads hold the 14th and 18th overall selections. Fans can watch the draft live on the QMJHL’s YouTube page. Rounds 2-14 will be held on Saturday beginning at 10am ADT.

Hitting the Road vs Acadie-Bathurst
32 mins ago