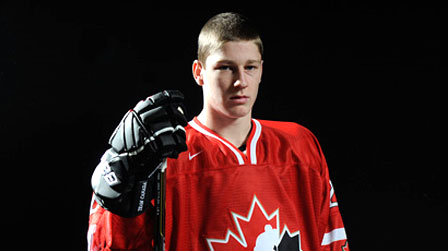 “We are extremely pleased to add another talented young player to our team”, stated Russell. “The Mooseheads organization and our fans are excited to welcome Nathan home to Halifax.”

“We’d like to thank Carl Gelinas and Francis Turbide for their outstanding contributions to our hockey club and we wish them success as they continue their careers in Baie-Comeau”, stated Russell.

Details of this trade were made public today after approval came from the Commissioner.  “Due to exceptional circumstances, the League has given the organizations the right to unveil the details of the trade prior to the opening of the trade period on August 1st,” said QMJHL Commissioner Gilles Courteau.

The addition of MacKinnon gives the Mooseheads three of the top prospects from the 2011 Entry Draft. The Club acquired the second overall pick on draft day and selected highly-touted forward Jonathan Drouin. Halifax then used the 11th pick in the draft, acquired during the Lewiston Maineiacs dispersal draft, to select Zachary Fucale, the first goalie chosen during this year’s draft.

The Mooseheads kick off training camp Wednesday, August 17th at Cole Harbour Place.  Their home opener is Friday, September 16th versus the Acadie-Bathurst Titan at the Metro Centre.

QMJHL postpones its return to play
3 days ago

Memorable Week in the NHL for Mooseheads Alumni
7 days ago