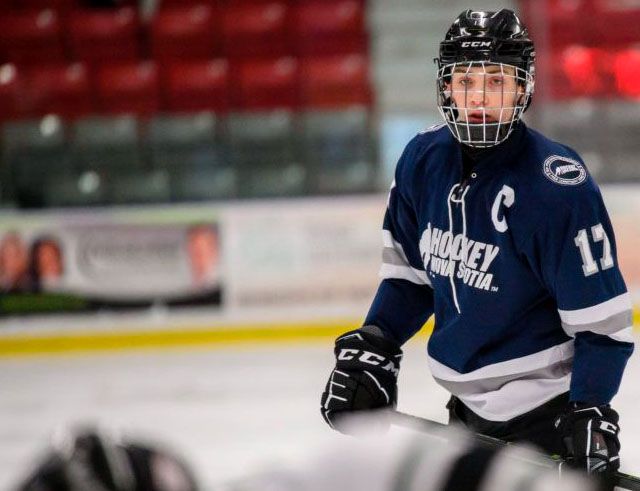 Halifax Mooseheads General Manager made a splash in the trade market on Tuesday just two days before training camp opens for the 2019-20 season. Russell swung a deal with the Sherbrooke Phoenix by acquiring highly touted 16-year-old defenceman Cameron Whynot and a 2021 third round draft pick in exchange for forward Xavier Parent.

Whynot was the highest ranked defenceman in the 2019 QMJHL Entry Draft and was selected ninth overall by the Phoenix. The Kentville, NS native is a left-handed shot and spent the last two seasons with the Valley Wildcats of the NSMMHL where he scored 18 goals and added 40 assists in 58 games. His 40 points in 2018-19 was tied for 7th in league scoring and made him the highest scoring defenceman. Whynot also had a strong physical element to his game with 93 penalty minutes and was named the NSMMHL defenceman of the year.

The big 6-foot-1, 180 pound blue-liner was the Captain of Team Nova Scotia at the Canada Winter Games in Red Deer, AB where Mooseheads Assistant Coach Jon Greenwood served as Nova Scotia’s Head Coach. Whynot also recently participated in Hockey Canada’s World Under 17 development camp where he scored one goal and one assist in three games with Team Blue.

“We are extremely happy to get a player of Whynot’s talent level that will help our team for years to come. He is a very highly ranked prospect and we feel he is a great building block for the future here in Halifax,” Russell said. 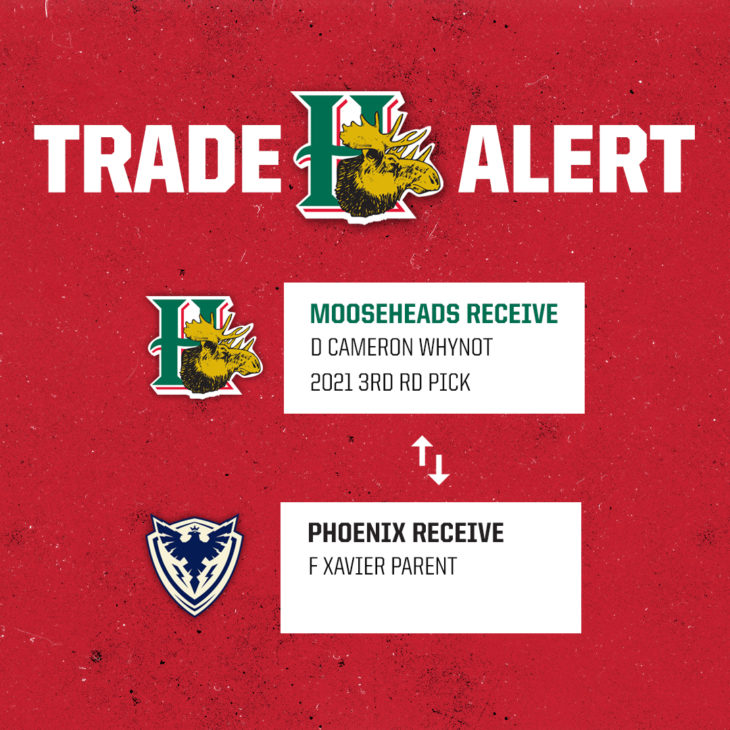 “To get a player of Cam’s ability you have to give up talent in return and the Phoenix are getting a great player in Xavier Parent. I’d like to thank Xavier for what he has brought to the Mooseheads both on and off the ice over these past couple of seasons and wish him all the best in Sherbrooke.”

Xavier Parent is entering his third year in the QMJHL after being selected fourth overall by the Mooseheads in 2017. He set career highs with 15 goals and 19 assists in 67 games last season and finished with a total of 63 points in 130 games in his Halifax career. Parent was especially effective during the postseason with the Moose by posting 17 points in 32 career playoff games.

Whynot’s addition helps fill out the defense corps for the Mooseheads who will start the season without star Jared McIsaac who is recovering from shoulder surgery and could be out until December.

The QMJHL’s Central Scouting department had high praise for Whynot prior to June’s draft.

“Cameron is a defenceman who loves to control the game. He has confidence in his abilities and remains calm when under pressure. He has a good shot; it is powerful and accurate. Most of his team’s offense rests on his shoulders. He is physically strong which allows him to win his battles along the boards.”

Training Camp is set to open on Thursday with rookies and free agents arriving for registration before getting on the ice for a pair of intra-squad games on Friday. The Mooseheads begin the preseason schedule on Sunday afternoon at 4pm at the Zatzman Sportsplex in Dartmouth when they take on the Cape Breton Screaming Eagles. Tickets are on sale now at the Ticket Atlantic Box Office, TicketAtlantic.com and at the Official Mooseheads Shop in Scotia Square Mall.