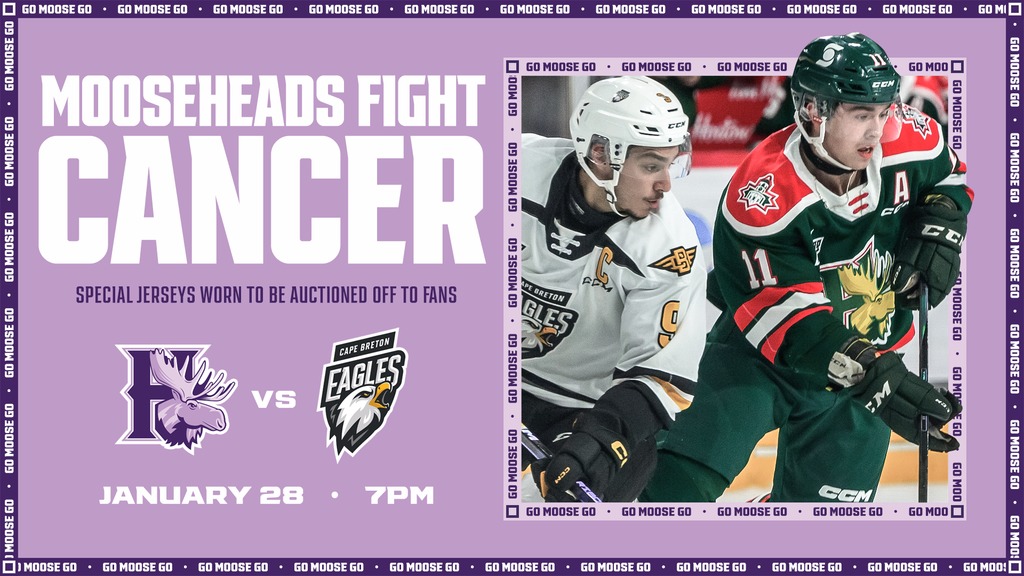 Join us for an important evening on Saturday at 7pm when Halifax welcomes the Cape Breton Eagles on Mooseheads Fight Cancer Night.

So many of us have had friends and family touched by cancer at some point in our lives. Long-time Mooseheads employee Sharon MacDonald, who has been battling breast cancer, will drop the puck in a pre-game ceremony. Halifax will wear special purple jerseys to raise funds and awareness for all types of cancer. The jerseys will be auctioned online starting on Saturday night. The Halifax Mooseheads Charitable Foundation Incorporated will donate funds raised to the Nova Scotia Make-A-Wish Foundation.

Halifax will take an incredible hot streak into the contest with the Mooseheads now 17-0-2-0 in their last 19 games. Captain Attilio Biasca and defenceman David Moravec were both named to the QMJHL’s Team of the Week on Monday for their contributions to the last three Mooseheads wins which included a five-goal effort by Biasca on Saturday in Saint John.

The Mooseheads remain second in the overall QMJHL standings at 31-7-4-1 which is six points back of the first place Quebec Remparts. Halifax has won four-of-six meetings so far this season versus Cape Breton while losing once in overtime and once in regulation. Both previous battles held at Scotiabank Centre this season have been extremely close with the Moose pulling out 5-4 victories on both occasions.

Halifax will continue a busy weekend at home on Sunday afternoon at 2pm when they welcome the Acadie-Bathurst Titan at 2pm.

Tickets are on sale now at TicketAtlantic.com