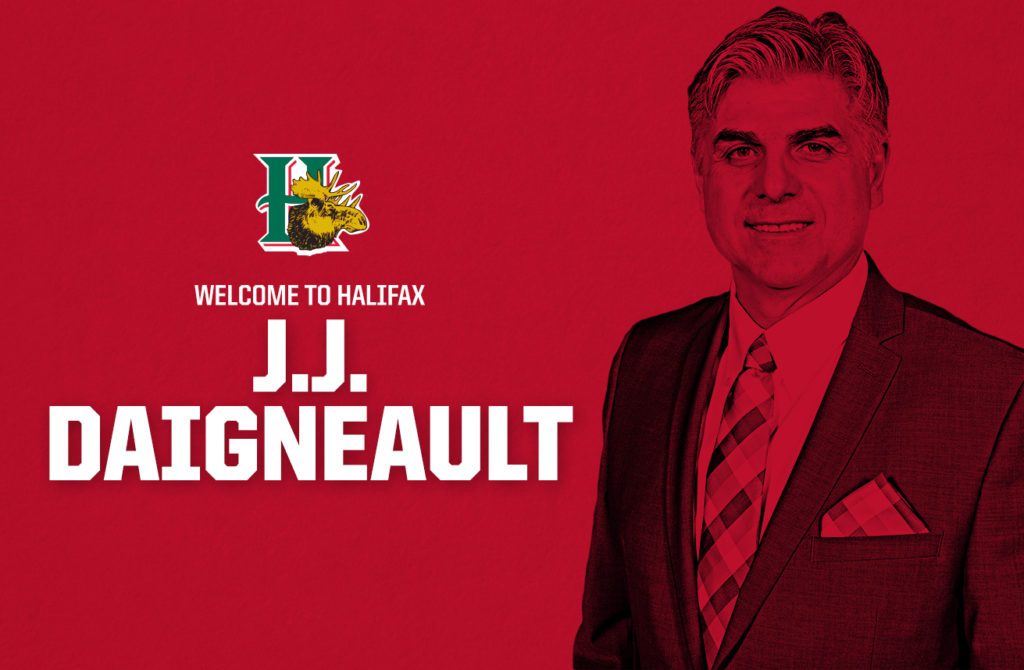 The long-time NHL defenceman and former Montreal Canadiens Assistant Coach takes over behind the Mooseheads bench following the departure of Eric Veilleux who left in June to join the Syracuse Crunch after one season in Halifax.

“I’m really grateful, happy and excited that Cam and Bobby chose me to be the next Head Coach of this storied franchise,” stated Daigneault.

The 53-year-old Daigneault spent six seasons as an Assistant Coach with the Montreal Canadiens from 2012 to 2018 and was an Assistant in the St. Louis Blues system with the AHL’s San Antonio Rampage last season. He also held an Assistant’s role in the AHL with Hartford/Connecticut from 2006-12.

“I’m very excited about this hire. J.J. was a high-end defenceman in our league and in the NHL which will be of tremendous value to the development of our players. He brings a wealth of coaching experience from the AHL and NHL level and he is a quality individual,” said Mooseheads owner Bobby Smith.

The Montreal, QC native enjoyed a 17-year NHL career with 10 different teams that saw him play in 899 career games and score 250 points. He was a member of the 1993 Stanley Cup Champion Montreal Canadiens.

“I’m very happy to welcome J.J. to the organization and we are fortunate to be getting a coach of his stature and background. Our players will benefit greatly from his experience and knowledge of the game,” General Manager Cam Russell said.

Daigneault was the 10th overall pick in the 1984 NHL Draft by Vancouver following a successful QMJHL career with Laval and Longueuil and one season with the Canadian National Team. He led Longueuil to consecutive President Cup Finals and earned the QMJHL’s Defenceman of the Year award in 1982-83. He was inducted into the QMJHL Hall of Fame as a player in April, 2019.

“It hit me on induction night and brought me back about 25 years and made me think that it would be something neat to come back to where it all started and work and maybe give something back to the Quebec Major Junior Hockey League,” Daigneault said.

The Mooseheads begin training camp on Thursday, August 15th and will open the preseason schedule on Sunday, August 18th against Cape Breton at the Dartmouth Sportsplex.

Season Tickets are on sale now at TicketAtlantic.com, the Official Mooseheads Shop in Scotia Square Mall or call 902-429-FANS.