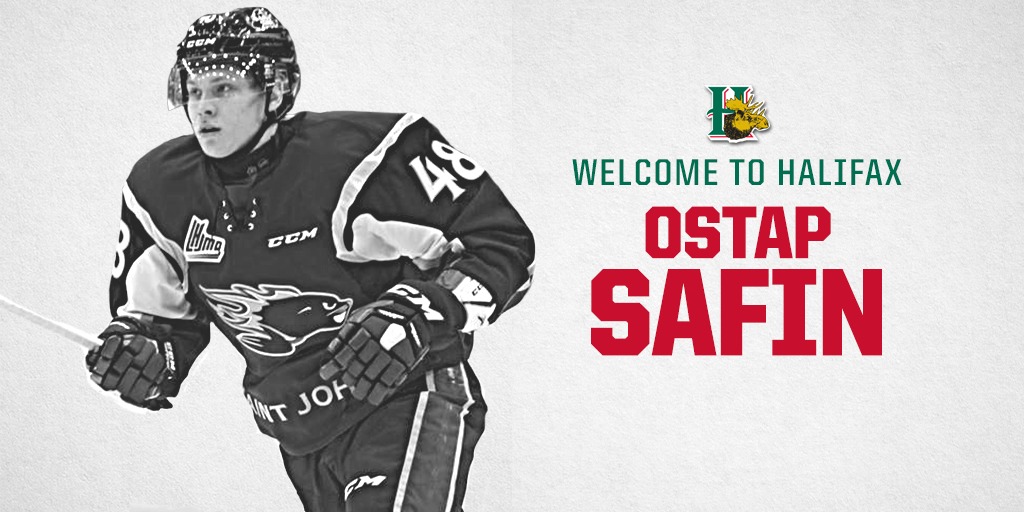 “We are excited to add a player of Ostap’s calibre to our lineup. He brings exceptional skill to our team,” Russell said.

“His talent and size will be a nice compliment to the excellent players we already have on the roster.”

The 19-year-old Safin is an Edmonton Oilers prospect and scored 26 goals and 32 assists as a rookie in the QMJHL last season. His 58 points led the Sea Dogs in scoring and he was named the team’s Rookie of the Year. Safin was fourth in league rookie scoring behind Filip Zadina (Halifax), Alexis Lafreniere (Rimouski) and Jakob Pelletier (Moncton). Safin’s 26 goals tied Tomas Jurco’s franchise record for goals scored by a rookie.

Safin, who will wear his familiar number 48 in a Moose uniform, is a left-handed shooting right winger and was recently returned to Junior after participating in Oilers training camp. He was signed to a three-year entry-level contract in March after Edmonton took him in the fourth round of the 2017 NHL Entry Draft. The Czech Republic native was selected in the 1st round of the CHL Import Draft by Saint John in 2017. He appeared in seven games for his country at the 2018 World Junior Hockey Championship, scoring one goal and two assists.

Safin and rookie Marcel Barinka will fill the two European import spots on the Mooseheads roster this season. Samuel Fagemo was drafted by Halifax in June, but the team could not secure his release from Frolunda.

This is the second important trade made by Russell in the span of a few days. Halifax acquired 20-year-old Samuel Asselin from Acadie-Bathurst on Friday. The veteran scored in his second game with the Herd to help the Mooseheads open the season with back-to-back wins over Saint John and Charlottetown. The next game for Halifax is on Friday night in Cape Breton and the team will also visit Moncton on Sunday afternoon. The Mooseheads Home Opener is scheduled for Saturday, October 27th at 7pm versus the Screaming Eagles.

Individual Tickets go on sale on Wednesday, October 3rd at 11:00am at the Ticket Atlantic Box Office, select Superstore Outlets, TicketAtlantic.com, the Official Mooseheads Shop in Scotia Square Mall or by calling 902-451-1221.

Mooseheads 2018-19 Season Ticket Memberships and 15-Game Packs are on sale now at TicketAtlantic.com, the Official Mooseheads Shop in Scotia Square or by calling 451-1221.