No luck vs Val d’Or for the Moose 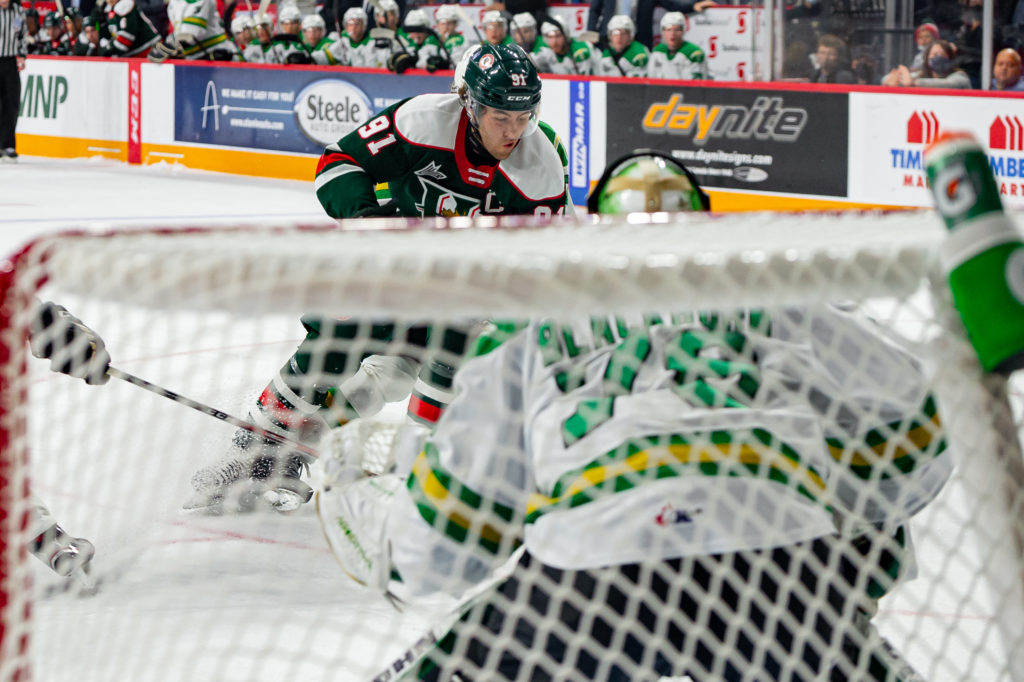 Val d’Or rode a hot goalie and and took advantage of their opportunities in a 5-2 victory over a frustrated Halifax Mooseheads team on Saturday night at Scotiabank Centre. First Star William Blackburn stymied the Herd with 28 saves and five different players lit the lamp for the visiting Foreurs to snap Halifax’s three-game winning streak.

There was seemingly no luck for the home squad with the puck as they had plenty of chances but saw almost all of the bounces go the wrong way as the Mooseheads’ record dropped to 4-2-0-1 on the season. Mathieu Cataford and Elliot Desnoyers had the Halifax goals but they came 41:12 apart to bookend the scoring as Val d’Or sandwiched five goals in between to improve to 5-2-1-0 and ending their own two-game losing skid.

Cataford opened the scoring in the game on the power play when the rookie notched his third goal of the season 13:37 into the first period with Senna Peeters and Bobby Orr earning assists and the Moose took a 1-0 lead to the dressing room after 20 minutes. It was the middle period where things started to fall apart for Halifax as goals by Mathis Demers and Alexander Mirzabalaev put Val d’Or up 2-1 while severly shifting the momentum. The Moose started the second period incredibly strong and had the Foreurs hemmed in their own end for substantial periods of time with a handful of scoring chances but nobody could beat Blackburn. If the first several minutes of the middle stanza belonged to Halifax, the second half of the period was clearly in favour of Val d’Or as the visitors switched the momentum to the other end of the ice and the Mooseheads looked like a different team.

The Foreurs kept the momentum coming with an early power play goal in the third from Zackary Michaud and then caught a break with the Mooseheads coming close on the power play but a a fortunate bounce of the puck sent Val d’Or in on a two-on-none breakaway and Jason Desruisseaux buried the short handed tally. Kale McCallum scored a back breaker with 6:49 to play to put the game out of reach at 5-1. Give Halifax credit as they kept pressing and got one back on Captain Elliot Desnoyers’ third goal of the season which came short handed during a 4-on-3 Val d’Or power play. Bobby Orr rushed the puck up the ice with his speed and fed it across to Desnoyers who put it home but it was too little too late for the Mooseheads.

Brady James took the loss and finished with 20 saves on 25 shots. Forward James Swan returned to the lineup for the first time this season following a hand injury and was a -2 with three shots on goal. Rookie defenceman Dylan MacKinnon missed a second consecutive game with and upper body injury, while Attilio Biasca still has yet to play this season with a broken thumb. He is expected to return next week. Rookie forward Vincent Gauthier was a healthy scratch.

The Mooseheads will quickly try to put this game behind them as they are right back in action at Scotiabank Centre on Sunday afternoon at 3pm for Kids Day versus Cape Breton. There will be kids themed promotions throughout the game and $5 tickets for children 12 & under. Tickets are on sale now at TicketAtlantic.com.