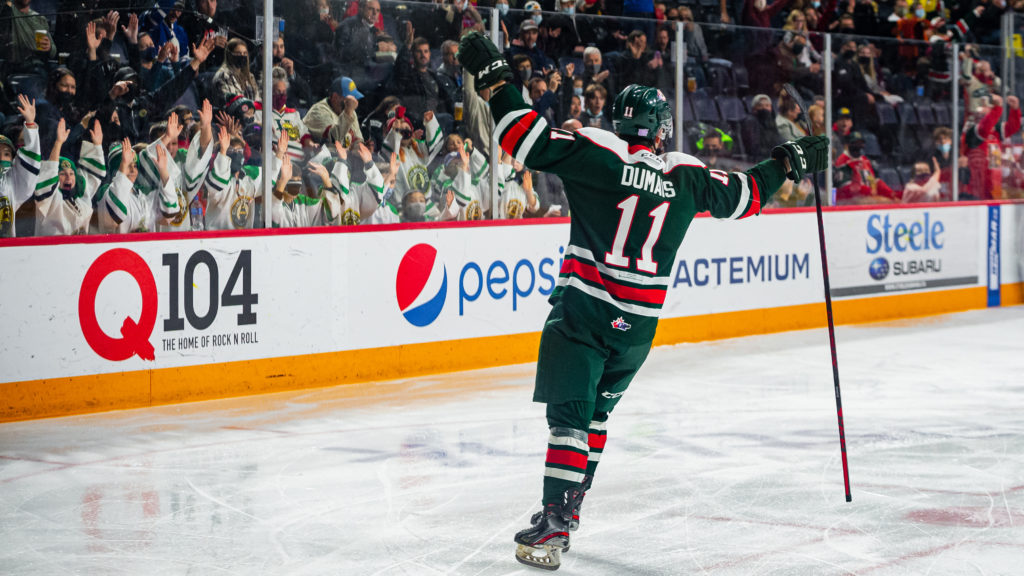 If you look around the current landscape of the NHL, there’s Halifax Mooseheads alumni everywhere.

Over the past decade, Halifax has turned out an endless cycle of talented NHL forwards including 2022 Stanley Cup winner Nathan MacKinnon, as well as Jonathan Drouin, Nikolaj Ehlers, Nico Hischier, Timo Meier and Filip Zadina, among others.

Now, Jordan Dumais hopes to add himself to that list in the coming years after he was selected 96th overall by Columbus in the 2022 NHL Draft.

“I’m a hockey nerd and I know a lot about [the Blue Jackets] and I’m excited to join them,” he said. “I think I fit right in. It’s a younger group. I wanted a team that’s kind of rebuilding but also a lot of young prospects that I can grow with.”

His selection in the draft bookends what was simply a fantastic season by the Ile Bizard, QC., native.

Dumais became just the eighth different Moosehead to record a 100-point season as his 108 points were the fourth most ever by a Halifax player. But what made it more special was he became just the third 17-year-old to ever hit the plateau, alongside Drouin and Ehlers.

“It was a great achievement,” Dumais said. “You always like getting those kind of achievements in your career. In April, I was working hard and things were clicking at that point. Our team was doing great, I was doing great personally, and everything was going well.”

Over the final 13 games of the regular season, Dumais tallied an incredible 37 points (15 goals). Ranked 73rd on the NHL’s Central Scouting list among North American skaters, the final stretch of his season was played like he had a point to prove.

“I’ve always had motivation,” he said. “I never run out of it.

“To this day I still have a chip on my shoulder. My whole career, I’ve always had something to prove.”

Mooseheads owner Bobby Smith, a veteran of 1,077 NHL games over a 15-year career, has been a big influence on Dumais. His road to Halifax was unusual, perse, as he took the route of prep school in the USA with the Selects Academy based out of Connecticut. He was the 18th overall pick in the 2020 QMJHL Draft.

“[Bobby has] trusted me since the start, ever since I’ve been in Halifax at 16,” Dumais said. “Obviously, he’s a big guy for the organization and he’s helped me a lot and trusted me along the way and I really appreciate it.”

The winner of the CHL Sportsman of the Year Award is Jordan Dumais of @HFXMooseheads!

The award is given out annually to the most sportsmanlike player in the Canadian Hockey League.#CHLAwards pic.twitter.com/XwwdCZDgRW

While his scoring ability stole the headlines this season, where he was named to the QMJHL’s Second All-Star Team, Dumais’ lack of time in the penalty box was also rewarded. After he totalled just six penalty minutes in 68 games, he was named the CHL’s Sportsman of the Year and took home the QMJHL’s Frank J. Selke Trophy as the league’s Most Sportsmanlike Player.

Dumais will be relied upon heavily next season on a Mooseheads roster that will look to advance past the first-round of the QMJHL Playoffs after they were beaten in Game 5 by Acadie-Bathurst last season.

The defeat stung – Halifax had a 2-0 series lead – but for Dumais, the focus has shifted to next season. While not necessarily at the forefront of his mind, if he can cross the 100-point mark again, he’ll join Drouin and Ehlers as the only players in team history to achieve multiple 100-point campaigns.

And with that, he feels there’s no better place to play in the CHL than Halifax to prepare for the eventual transition to the pro game.

“The rink you play, it’s NHL level,” Dumais said of the Scotiabank Centre that will host the 2023 World Juniors later this year. “They have a great coaching staff, great equipment, great locker rooms. You get treated like professionals and it gets you ready.

“I matured a lot in Halifax as they’ve done a great job developing me.”

L'Heureux stars in return to lineup
15 hours ago