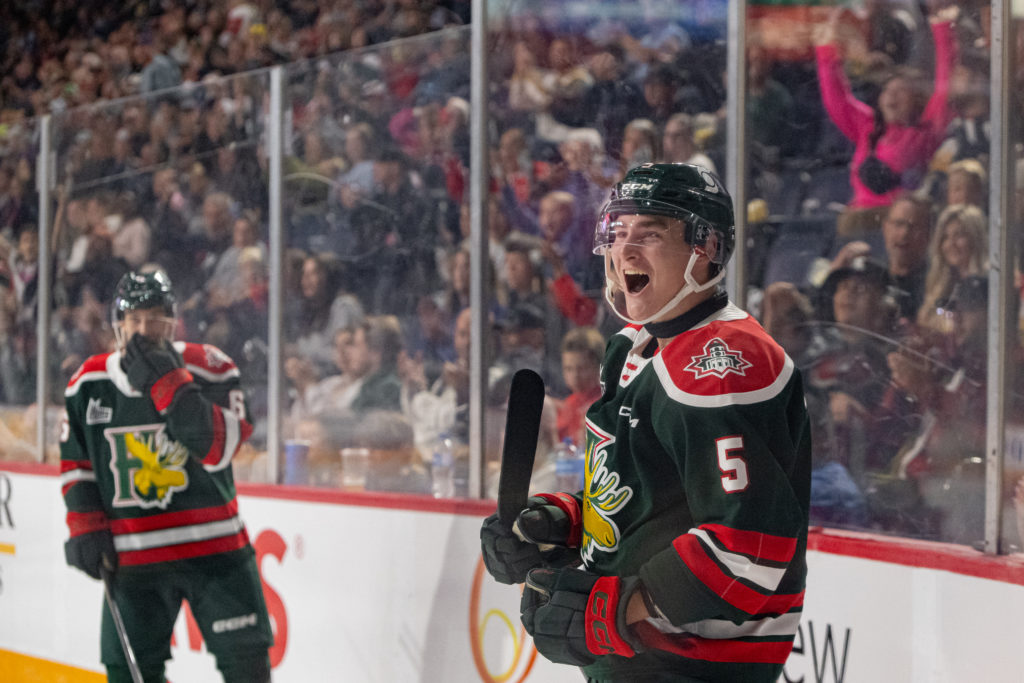 Markus Vidicek played the role of hero in Saturday’s night home opener for the Mooseheads by scoring the overtime winner in a 5-4 victory over the Cape Breton Eagles at Scotiabank Centre.

The crowd of 7,477 erupted as Vidicek buried his shot from the slot on the power play after a nice pass in front by Attilio Biasca to set it up. That capped off an exciting first night of action between the Nova Scotia rivals after the season had been delayed for both teams due to Hurricane Fiona.

The game-winning goal came during a lengthy power play for the Herd that began with 21 seconds remaining in regulation and continued when Eagles defenceman Jeremy Langlois closed his hand on the puck and tossed it away from the crease 1:28 into the overtime period. The Mooseheads scored four of the final six goals in the game to walk away with the victory, their first in a home opener since 2017.

Jordan Dumais arrived in Halifax at 3am Saturday morning following training camp with the Columbus Blue Jackets and got his season off to a hot start with three assists. Attilio Biasca, Brady Schultz and Mathieu Cataford each had a goal and an assist while defenceman Jack Martin tallied for the first time in his young career when goalie Nicolas Ruccia misjudged Martin’s high point shot in the second period by whiffing on the catch and the puck trickled over the line. Cam Whynot chipped in with a pair of assists for Halifax.

Cape Breton got two goals from Zachary Gravel while Luke Patterson and Cam Squires also found the back of the net. Mathis Rousseau picked up the win between the pipes for the Moose with 28 saves on 32 shots. Ruccia was tagged with the loss after making 33 saves.

Next up for the Mooseheads is a road game on Wednesday in Acadie-Bathurst before the team returns to Scotiabank Centre next Friday night to battle Victoriaville at 7pm. The first 3,000 fans will receive free Mooseheads schedule fridge magnets. Tickets are on sale now at TicketAtlantic.com.