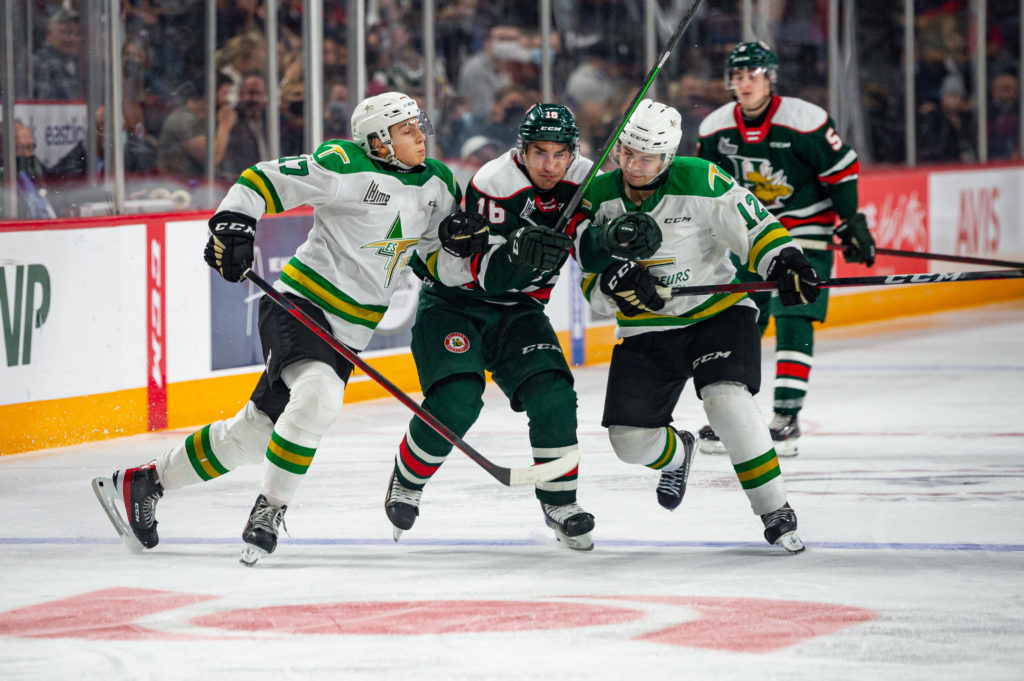 It has been awhile. A little more than 20 months to be exact.

That’s how long the Mooseheads have waited between road trips to the province of Quebec. The last time Halifax played a game somewhere other than Nova Scotia, Prince Edward Island or New Brunswick was on March 1st, 2020 in Shawinigan, QC, not long before the first wave of the Covid-19 pandemic prematurely shutdown the QMJHL’s 2019-20 season.

With all of that in the rearview mirror, the Mooseheads boarded the bus on Tuesday, bound for Montreal where they stayed overnight and practiced on Wednesday. Players from the area were given the opportunity to stay at home with their families while parents made their way to the rink on Wednesday morning for the rare chance to watch their sons practice.

Halifax will begin the three-game road trip on Thursday night in Val d’Or at 8pm Atlantic time vs the 7-8-1-0 Foreurs. The Mooseheads enter the game with a 9-6-0-1 record and are looking for revenge after falling 5-2 to Val d’Or at Scotiabank Centre earlier this season. The three-goal loss marks the largest margin of defeat for the Herd this season. The team also fell 4-1 to Charlottetown on October 8th. It goes to show how competitive the Mooseheads have been this year under the coaching staff of Sylvain Favreau, Liam Heelis and Brad MacKenzie.

The team, which is sitting on 899 franchise wins, begins the trip with a fully healthy lineup but will be without the services of forward Zach L’Heureux who has three games remaining on a suspension stemming from a cross checking incident in Cape Breton on November 12th.

Captain Elliot Desnoyers leads the Moose in scoring with 27 points on 12 goals and 15 assists. He was named to both the CHL and QMJHL Teams of the Week after putting up eight points in three games last week.

Following Thursday’s matchup, the Mooseheads will travel to face the other Abitibi region team on Friday night at 8pm Atlantic in Rouyn-Noranda (8-6-0-3). The trip wraps up Sunday at 4pm in Gatineau (8-4-2-2) at the brand new Slush Puppy Centre vs the Olympiques. All games are available to stream on the CHL TV webcast and can also be heard on City News 95.7 with Garreth MacDonald.