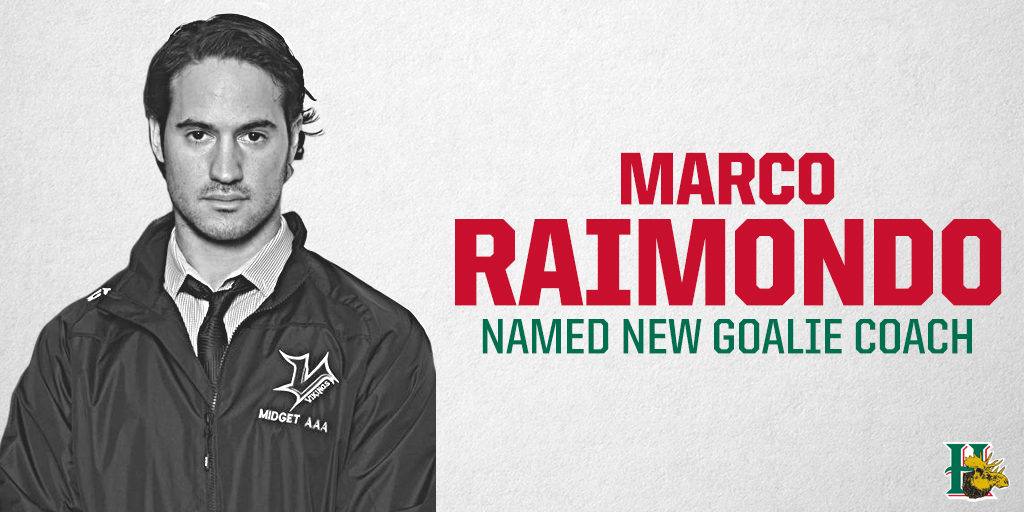 General Manager Cam Russell has named Marco Raimondo as the new Goaltending Coach for the Halifax Mooseheads. The 30-year-old from Montreal, QC takes over for the departed Eric Raymond.

“We like his enthusiasm, work ethic and drive. He is knowledgeable and hard-working and we look forward to working with Marco this season,” said Russell.

Raimondo comes highly recommended and is the owner of Quartier Hockey and Raimondo Goaltending.  Since its inception in 2009, Raimondo’s goaltending school has helped students reach their professional and Canadian Hockey League goals among others.

“This is a fantastic opportunity to join the premier organization in the QMJHL,” Raimondo said.

“I was able to start working with Alexis Gravel near the end of July and I’m looking forward to maximizing both he and his partner’s potential.”

Raimondo will join the Mooseheads in time for training camp which begins on Friday, August 17th at the Dartmouth 4-Pad.

The Mooseheads will visit Cape Breton to open the preseason on Sunday, August 19th and will host the Screaming Eagles on Tuesday, August 21st at 7pm at the 4-Pad in their first preseason home game. Tickets are on sale now. Click here for details on prices and further preseason information.

Mooseheads 2018-19 Season Ticket Memberships are on sale now at TicketAtlantic.com, the Official Mooseheads Shop in Scotia Square or by calling 451-1221.

Hitting the Road vs Acadie-Bathurst
6 hours ago