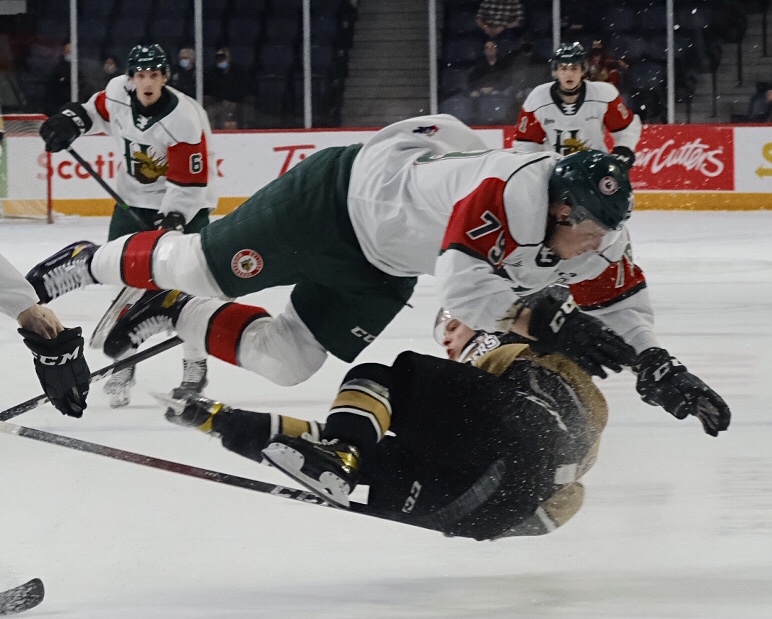 The fans inside Scotiabank Centre were treated to an entertaining game on Friday night despite being witness to a 5-1 loss by the hometown Mooseheads.

Jason Horvath dished out some bone-crushing hits while recent call-up Dylan Chisholm went toe-to-toe with Charlottetown’s Ben Boyd in an old school heavyweight fight that had the building buzzing.

Alexis Gravel kept the score as close as he could while stopping 30 of 34 shots before Head Coach J.J. Daigneault decided to bring on Brady James in a mop up role as Charlottetown had the ice tilted in their favour for most of the night. The final shots were 46-15 and the score could have been drastically different if not for Gravel’s play between the pipes.

Bobby Orr picked up Halifax’s lone goal when he forced a turnover at the far blueline before streaking in and making a perfect shot on a shorthanded breakaway. The goal was the 15th of the season for the rookie and was unassisted.

Thomas Casey scored twice for Charlottetown and added an assist while Brett Budgell also had a three point game with one goal and two helpers. Other goal scorers for the Islanders were Lukas Cormier and Bailey Peach. Colten Ellis picked up the victory in goal with 14 saves.

Elliot Desnoyers was a late scratch for the Herd with an upper body injury as he joined James Swan, Cole Foston, Jake Furlong, Brendan Tomilson, William Robitaille, Alex Tessier and Keegan Hunt on the injured list. Zachary L’Heureux sat out for the second and final game of his suspension. Halifax called up forward Merle Putnam to fill in on the fourth line.

The game marked the third of five consecutive meetings between the division rivals who will play again on Tuesday in Charlottetown and Saturday, April 17th at Scotiabank Centre.