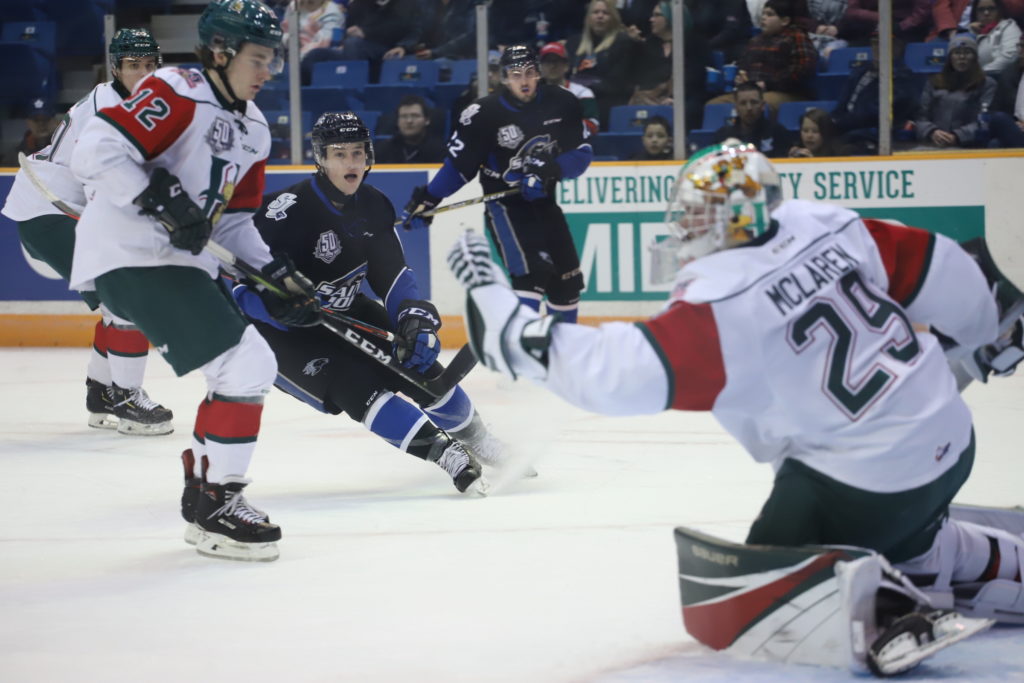 Cole McLaren couldn’t have picked a better way to celebrate his 19th birthday than by making 36 saves in a 4-0 Mooseheads shutout of the Saint John Sea Dogs. McLaren was stellar between the pipes and Brock McLeod scored twice as Halifax earned a fifth consecutive win.

The Mooseheads have now picked up victories in 12 of their last 14 games to improve to 42-12-2-1. Joel Bishop and Arnaud Durandeau also scored in the holiday Monday matinee at Harbour Station while Jared McIsaac and Walter Flower each had two assists.

McLaren held off a somewhat surprisingly strong offensive effort from the Dogs as the Herd took a while to find their stride in the game. Durandeau eventually got the visitors on the board at 12:38 of the first period when he jammed in his 27th goal of the season from the side of the net following a shot by BO Groulx from the circle. Halifax added to the lead in the middle frame when Marcel Barinka spotted McLeod in front and he buried it behind Saint John goalie Zachary Bouthillier for his first of the afternoon. With the Herd leading 2-0 in the third period Bishop tipped in a blast from McIsaac at the 11:58 mark and McLeod finished it off with his second tally just a few minutes later by fighting off a defender in front of the crease to make it a 4-0 game.

McLeod was named the first star of the game while McLaren’s fourth shutout of the season gave him the second star. Bouthillier ended up with 41 saves and the third star.

The long point streak for Samuel Asselin ended at 15 games as he was held off the scoresheet for the first time since January 11th. The nine-game point streaks for Raphael Lavoie and Antoine Morand were also snapped. The two assists for McIsaac gave him 131 career points as he moved past Jasmin Gelinas for second on the Mooseheads franchise scoring list by a defenceman.

4,360 fans were in attendance for the Family Day holiday in New Brunswick while fans back home in Nova Scotia enjoyed Heritage Day.

The Herd were without Maxim Trepanier for the second straight game as he continues to recover from an injury suffered on Friday night against Gatineau. The injury is not believed to be serious but the team is being extra cautious with the player who missed several games over the last month-and-a-half.

The next game for the Mooseheads is coming up this Saturday night at 7pm on home ice in a rematch against the Sea Dogs. Halifax will also host Blainville-Boisbriand on Sunday afternoon at 3pm. Tickets are on sale now at the Ticket Atlantic Box Office, select Superstore Outlets, TicketAtlantic.com, the Official Mooseheads Shop in Scotia Square or charge by phone 902-451-1221.