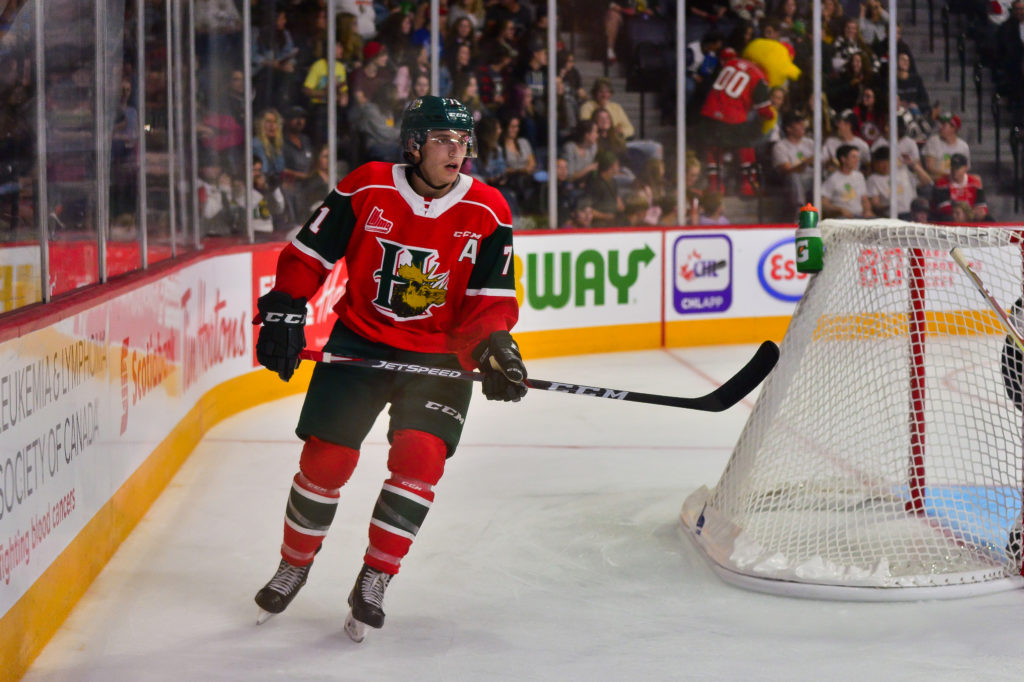 The Mooseheads made it a successful road trip on Saturday when they scored a 4-3 overtime victory in Baie-Comeau. Max Trepanier sniped the winner with a nice shot 2:02 into into the extra period to give Halifax two wins in three games away from home on the trip. The Herd also had a win over Drummondville on Wednesday.

Trepanier’s goal came moments after a big save by Cole McLaren on Drakkar Captain Gabriel Fortier who had a point blank shot on the goalie. Defenceman Jason Horvath then sent a long pass up off the boards to Trepanier who snuck in on the right side and beat Lucas Fitzpatrick high on the far glove side to send the Mooseheads players off the bench in celebration. The goal was the third point of the afternoon for Trepanier who also notched a pair of assists to earn the first star of the game.

The Halifax record improved to 3-4 with the win and the team will head home to face off with the Saint John Sea Dogs on Thursday night at the Scotiabank Centre.

The Moose opened the scoring in the first period at 9:13 of the first period when Edmonton Oilers prospect Raphael Lavoie tallied for the third time this season when he was left all alone in front of the net and had plenty of time to get a shot off from the top of the crease. The Drakkar fought back to tie the game in a dominant second period where they out-shot the Herd 13-4. Vincent Dupuis got the equalizer, setting up an exciting final stanza.

The teams combined for four goals in the third period with Baie-Comeau jumping in front 2-1 on a Raivis Kristians Ansons power play marker that came on a two-man advantage at 5:06. Cole Stewart’s first of the season tied things at 2-2 at 8:38 while Benoit-Olivier Groulx put the Mooseheads back in the lead 3-2 on the power play at 10:50. The lead didn’t last though as Julien Letourneau excited the crowd of 1,400 with the tying tally with only 4:57 remaining in regulation. That set up overtime where Trepanier proved to be the hero.

Raphael Lavoie finished the day with a goal and an assist to join Trepanier as the two Mooseheads players with multi-point outings. They are the top two scoring players for Halifax through seven games with Lavoie producing nine points and Trepanier scoring seven points. Other players grabbing assists in the game for the Moose were Horvath, Walter Flower and Zack Jones – who had his goal-scoring streak end after four games.

Cole McLaren had another fine outing between the pipes to earn his third win of the season with 28 saves. He remains in the top five in the QMJHL in both goals against average (2.13) and save percentage (.928).

Both teams went 1-6 on the power play. Halifax continues to lead the league in penalty killing with a rate of 90.6.t

The Mooseheads battle Saint John at home on Thursday at 7pm before travelling to Moncton on Friday night and then returning home again on Sunday, October 13th at 3pm to face Val d’Or. Tickets are on sale now at the Ticket Atlantic Box Office, TicketAtlantic.com, select Superstore outlets, the Official Mooseheads Shop in Scotia Square Mall or by phone 902-451-1221.