Winning Start to the Season 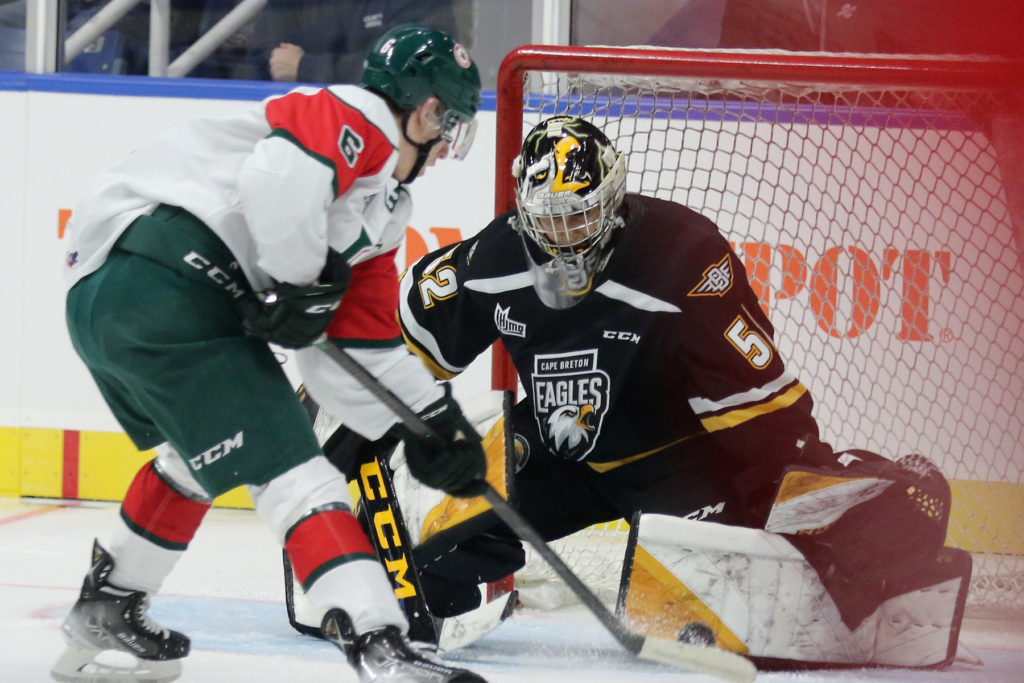 The Mooseheads couldn’t have asked for a much better start to the 2021-22 regular season than what they accomplished on Friday night at Centre 200 in Cape Breton. Halifax got goals from Jordan Dumais, Markus Vidicek and Landon Miron in a 3-2 win over their provincial foes.

Goalie Brady James was named the first star for his excellent 22-save performance to backstop the team to their two points in the standings in the first of two straight matchups with the Eagles. The squads meet up again Saturday night at 7pm at Scotiabank Centre in the Home Opener for the Mooseheads. Tickets are on sale now at TicketAtlantic.com. Doors will open at 5:30pm.

Dumais was the third star and likely the biggest difference maker on the ice all night as he scored to tie the game 1-1 in the first period before picking up an assist on Vidicek’s go-ahead goal late in the second period. He also had a great scoring chance when he showed off his speed on a shorthanded breakaway before having his stick lifted at the last second. Dumais, Vidicek and Bobby Orr formed the top line and all had some spectacular moments in the win.

There were a pair of notable firsts in the season opener with defenceman Brady Schultz and rookie forward Mathieu Cataford grabbing their first career assists on Miron’s game-winning power play goal in the third period.

Cape Breton made it close when they scored in the final minute of action with the net empty and an extra attacker on the ice but the Mooseheads were able to hold on thanks to some big saves down the stretch from James. The Eagles goals came from Connor Trenholm and Sean Larochelle.

The Mooseheads played without their two leading scorers from last season with Elliot Desnoyers still attending training camp with the Philadelphia Flyers and Zach L’Heureux serving a suspension held over from last season. He will sit out two more games before returning to the lineup on October 9th on home ice. James Swan and Attilio Biasca continue to rehab a pair of hand injuries and are out indefinitely.