EHLERS STARS FOR MOOSE IN WILD GAME AGAINST HUSKIES 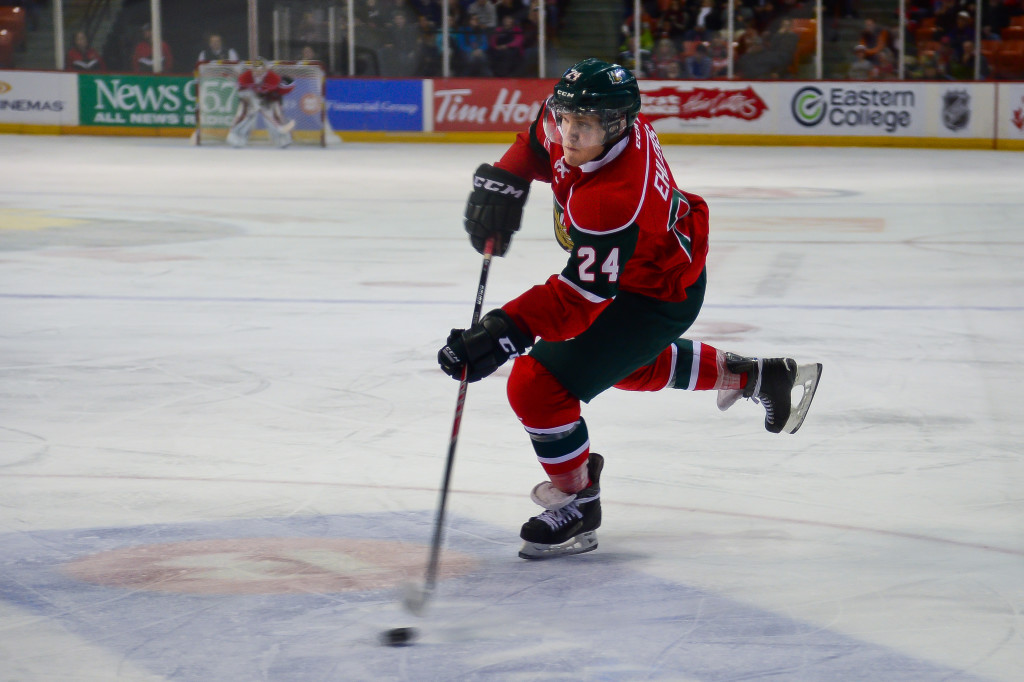 Make it four wins in a row and counting for the red hot Halifax Mooseheads after the team scored an entertaining 8-5 victory over the Huskies on Saturday night in Rouyn Noranda.

The Moose got off to a shaky start when Jeremy Lauzon’s shot from beyond the blueline somehow fooled Halifax goaltender Zach Fucale. The Herd fell behind by scored of 2-0 and 3-1 before fighting back with three goals in the second period and a whopping five tallies in the third, highlighted by another amazing night from Nikolaj Ehlers.

The superstar from Denmark scored four goals and added two assists to give him 11 points in his last two games. The reigning QMJHL Second Star of the week now has the team lead in scoring with 41 points in 20 games and a 12 game point scoring streak.

Ehlers tallied his first of the game on an electrifying shorthanded breakaway as he used his speed to blitz the Huskies defensemen and tucked the puck past goalie Samuel Harvey at 14:24 of the second period. The goal cut the Huskies lead to 3-2 and clearly shifted the momentum in Halifax’s favour. Ehlers then set up Danny Moynihan just over three minutes later as the Herd pulled even 3-3.

Rouyn Noranda was once again able to regain the lead when Antoine Waked made no mistake on the power play, firing one past Fucale on a cross-ice pass with only 32 seconds to go in the period.

Many of the 2,071 fans had not even returned to their seats at the Iamgold Arena when Ehlers broke free on yet another breakway just seven seconds into the third period to even the score 4-4 as the Halifax bench went wild.

After Mathieu Lemay’s power play marker at 7:08 gave the Dogs the lead once more, the Moose turned up the heat and never looked back as they scored four straight to end the game. Danny Moynihan’s second of the evening tied it, while Andrew Shewfelt notched his first of the season with what would become the game-winner and Ehlers capped off his magnificent night with two more including an empty netter.

The Herd chased Harvey from the net following Shewfelt’s goal with 7:23 remaining. The netminder finished with 28 saves on 34 shots while backup Alexandre Belanger came in to save three of the four shots fired in his direction. Fucale shook off his rough start to the game and came up with some big stops in the final period to finish with 18 saves.

The Mooseheads have won four straight games for the first time this season and are now over the .500 mark with a 13-12-2-1 record.

Ehlers picked up the First Star of the Game, while Moynihan got the nod as the Second Star and Rouyn Noranda’s Alexandre Fortin (2 assists) was named the Third Star.

Dominik Blain-Dupuis made his Halifax debut, wearing number 20 and centred a line with Kelly Bent and Brandon Vuic on the wing.

Connor Moynihan served the second game of a two-game suspension and will be available to return to the Moose lineup when Halifax wraps up the road trip tomorrow afternoon at 5pm in Val d’Or.