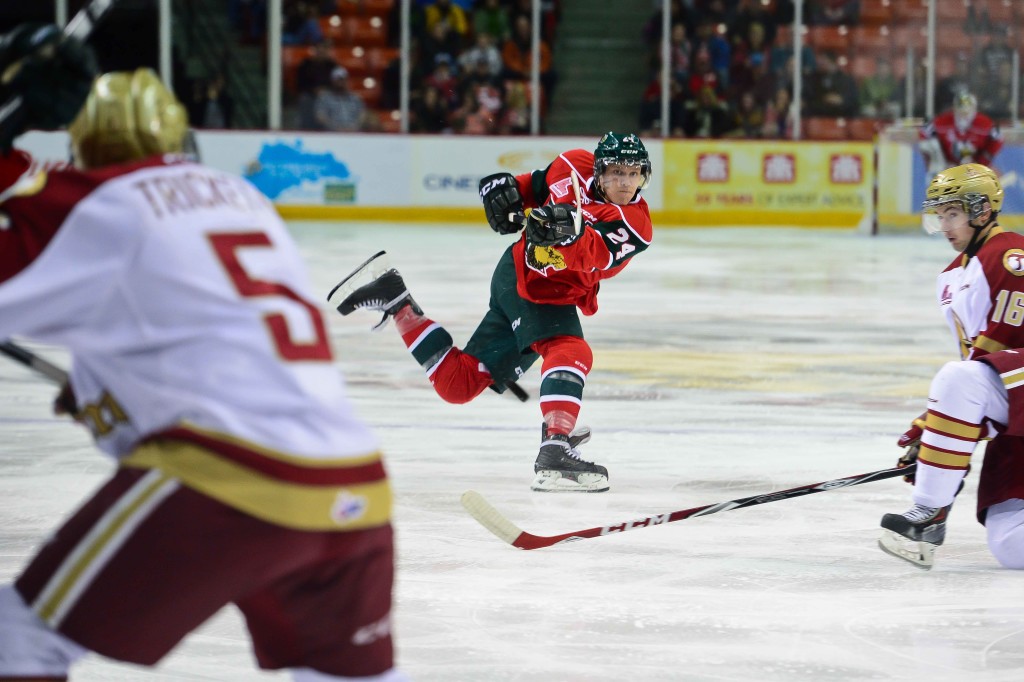 The Mooseheads and Titan engaged in what will be described as nothing less than an epic battle on Wednesday night at Scotiabank Centre in Halifax. Neither team refused to give up the fight as the two teams provided fans with a nail-biter. Halifax and Bathurst went back and forth on the scoreboard until the Herd finally prevailed with a 5-4 shootout victory.

Nikolaj Ehlers stole the show by scoring a hat trick and adding the lone goal in the shootout to help his team snap a two-game losing skid.

“We had to bounce back from last weekend and I think we still had some problems today, but we got the two points and that’s what matters,” said the Winnipeg Jets prospect following the game.

The Mooseheads star forward appeared to have sealed the victory when he finished off his hat trick with only 29 seconds remaining in the third period, giving Halifax a 4-3 lead, but former Moosehead Andrew Ryan shocked the Halifax fans when he tied the game with only 0.3 seconds left on the clock.

Ryan had a huge night against his former club, with two goals and two assists to earn the second star of the game.

Penalties were a huge factor throughout the contest as both the Titan and Mooseheads had a steady parade to the penalty box. Acadie-Bathurst converted on two of seven power play opportunities, while the Herd put up a goose egg in seven chances with the man advantage.

Ehlers also had an assist in the game and was named first star as he displayed his talents in front of Jets General Manager Kevin Cheveldayoff who was watching from the press box.

“He obviously had a very successful night you know offensively, but I’m really pleased with the way the Mooseheads coaching staff and everybody in the organization is working to help him become a pro, because ultimately that’s where he wants to be in the end,” Cheveldayoff said as he stood outside the Halifax dressing room after the game.

The Winnipeg General Manager doesn’t pinpoint anything in particular that his prized prospect needs to work on immediately.

“I think there’s always room for improvement for players with offensive skill because you know that’s a special gift and I think if you ask them they’ll always look at improving the little parts of their game.”

Ehlers, the Jets top selection in the 2014 NHL Entry Draft, gave his future GM in Winnipeg a wink and a nod before he was surrounded by the waiting media who were anxious to get his take on the club’s emotional victory.

“It was definitely a good night. I mean we got the win that’s what’s important, so I’m just glad to stand here and say that we got two points.”

Timo Meier also played a large role in helping Halifax pick up its eighth win of the season, scoring a goal and adding a pair of assists to up his team-leading point total to 26.

“I think it’s a big win because we had a big comeback in the third period and maybe we weren’t quite ready to play in the first two periods, but we had a great push at the end and deserved that game,” he said.

The Mooseheads trailed 3-2 going into the final 20 minutes after Ryan put the Titan in front with his first of the night at 4:18 of the 2nd period on the power play. Ehlers then scored back to back goals for Halifax with under five minutes to play in the game before Ryan sent the matchup to overtime and eventually a shootout.

Halifax outshot Acadie-Bathurst 37-25 as Zach Fucale made 21 saves for the Moose. Halifax native Jacob Brennan was sharp all night long in turning aside 33 shots for the Titan.

Connor Moynihan returned to the Mooseheads lineup after missing five games with an upper-body injury. The 17-year-old New Hampshire native had eight penalty minutes while playing on a line with Andrew Shewfelt and Jordan King.

Older brother Danny Moynihan served the first game of his two-game suspension. He disciplined by the QMJHL for a boarding penalty late in last weekend’s loss to Moncton.

The Mooseheads will return to home-ice on Friday night when they open a home-and-home series with the rival Screaming Eagles at 7pm. Tickets are on sale now at the Ticket Atlantic Box Office at Scotiabank Centre, select Superstore Outlets, www.TicketAtlantic.com or by phone at 902-451-1221.

Halifax has jumped ahead of Cape Breton in the Maritimes Division standings with 19 points, one better than the Screaming Eagles, putting the Herd in fourth place in the division.

Ehlers says it was nice to rally in front of the home crowd of 5,919.

“I don’t think we’ve had a game this year where we’ve been behind in the third period and came back and won, so it was definitely an important victory for us tonight.”